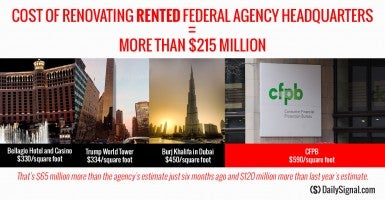 The newly created Consumer Financial Protection Bureau is renovating the Washington, D.C., headquarters it rents—at a cost per square foot that is more expensive than Trump World Tower in New York City.

The CFPB project is estimated to cost taxpayers more than $215 million, prompting members of the House Financial Services Committee to question agency officials about its rising price tag. Cost projections have increased $65 million in six months and $120 million since last year’s estimate.

Some of the building’s extravagant features include a four-story glass staircase, two-story waterfall and a sunken garden.