Congress Needs to Get Serious About Eliminating Some Government Programs 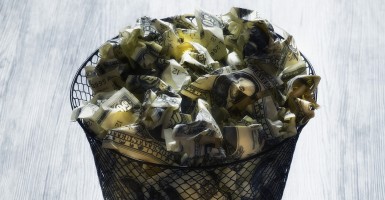 Summer is here and school is out.  For many parents this means toys everywhere around the house and never-ending debates to get the kids to put their stuff away. Or, some parents may choose to just pick up after their kids.

Like America’s kids, Washington is quite good at putting out new government programs and keeping old ones lying around. Yet lawmakers do a poor job of putting away government programs that no longer work, waste taxpayer dollars and are outside the legitimate scope of the federal government.

For example, there are about 80 education programs designed to help improve teacher quality administered across 10 federal agencies.  The federal government also funds about 80 programs in eight different agencies to provide transportation services to disadvantaged individuals. There are also about 45 federal job training programs administered by nine different federal agencies with questionable impact on preparing Americans for the workforce.

A government waste commission could help clean up this mess.

Spring through summer is when Congress is supposed to debate the more than $1 trillion in spending that require annual appropriation, or government agencies aren’t allowed to spend the money come Oct. 1.

This year, Congress got off to an early start as lawmakers had agreed to the top-line spending level by January. The normal budget process calls for appropriations work to start in May, and  the House already has passed five spending bills.

Nevertheless, it looks increasingly as though the process is breaking down once again. Talk of a return to regular order by which Congress is supposed to pass each of the 12 spending bills that fund most government agencies and programs before the end of September is increasingly being replaced with rumors of various stopgap measures under consideration.

Sen. Barbara A. Mikulski, D-Md., who chairs the Senate Appropriations Committee, announced in early June that she would like to see spending bills “clustered” together into minibuses or a maxibus. A bus is a term used to describe a legislative vehicle that includes more than one spending bill. By bundling several bills into one package, lawmakers often seek to minimize debate and bundle enough interests together to secure passage. Mikulski also seemed to open the door for a continuing resolution, a vehicle that extends spending at current levels for a specified period of time and avoids  a government shutdown.

As reported by Roll Call: “I’m getting ready. My buses will be lined up. We can decide whether they’re going to be mini or maxi … or extended length,” Mikulski said.

But the process isn’t stalling because lawmakers are busy debating which government programs to eliminate or consolidate to improve government services and save taxpayer dollars. Instead, a White House veto threat over an amendment to block EPA power plant regulations is among the reasons for a delay on key spending bills in the Senate. The Senate has yet to pass any of its spending bills this year, and none are anywhere near reaching the president’s desk.

Despite the early start into this year’s appropriations season, Congress has yet to prove it can complete its most fundamental duty—budgeting—in accordance with its own budget process and on time. Meanwhile spending keeps going up and poorly functioning, duplicative and out-of-scope government programs keep piling on.

A bi-partisan government waste commission, charged with identifying programs for elimination and consolidation according to a set of clear and concise criteria, could help to pick up after Congress and save taxpayer dollars.

Rep. Doug Collins, R-Ga.,  recently introduced legislation to establish the Commission on the Accountability and Review of Federal Agencies (CARFA or H.R. 4566),  which would conduct a six-year comprehensive review of federal agencies and programs, two appropriations bills at a time, with the charge to identify government functions for elimination or realignment.

With Congress yet again on course to indiscriminately fund most government agencies and programs through a stopgap measure, such as a continuing resolution, or a variety of “buses,” lawmakers should at least recognize their failure to clean up after themselves and put in place a waste commission to do the dirty work for them.