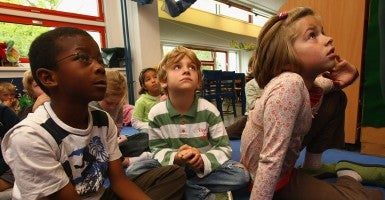 Support for school choice is on the rise, but Americans hold a “dim view of the federal government’s performance in K-12 education,” found the Friedman Foundation for Educational Choice in its newly released “2014 Schooling in America Survey.”

The survey found 58 percent of Americans think that K-12 education has gotten off on the “wrong track,” and 74 percent have a negative view of federal involvement in education.

By contrast, the survey found 63 percent of Americans support school vouchers—a 7-point increase from 2012 – and the highest ever for vouchers. A full 64 percent of respondents support tax-credit scholarship options, which enable corporations or individuals to receive tax credits for donations to non-profit organizations that provide scholarships to children to attend a private school of choice. Education savings accounts and universal access to school choice also saw increases in public support.

The survey found 56 percent support ESAs, which empower families to direct education dollars to multiple education services, providers and products at once. ESAs allow parents to use a portion of the funds the state would have spent on their child in the public system toward a variety of educational options, including private schooling, tutoring, curricula and special education therapies. Families can even roll over unused funds into a college savings account.

In addition, the study also found that two-thirds of respondents either didn’t know how much was spent on average per pupil, or underestimated per-pupil spending.

This lack of knowledge regarding school spending stands in stark contrast to the type of transparency that options such as education savings accounts create. With an ESA, parents know exactly how much funding is allocated to their account and can spend those funds on educational options that best meet their child’s individual needs.

This tracks with a recent Rasmussen poll that found just 34 percent of American adults with children in elementary or secondary school support Common Core, down 18 points since November.

As the Cato Institute’s Jason Bedrick noted, the survey’s findings “should warm the cockles of the hearts of everyone who supports greater choice in education: Each generation is progressively more favorable and less opposed to educational choice.”