This Standard Is One Reason the Price of Gas Will Increase 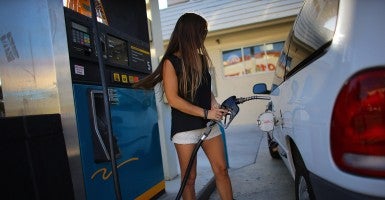 Not thinking things through is a chronic problem with policy-makers in Washington. Superficial and easily sound-bite-able policies dominate the thoughtful-but-complex ones. For instance mandates for biofuel use would seem to be driven by basic supply and demand—more domestic fuel would lead to lower fuel prices for consumers. But the reality is more complex.

On June 26, the Congressional Budget Office released a study on the impacts of the Renewable Fuels Standard and found that, if unchanged, the RFS will increase gasoline prices by 13 to 26 cents per gallon and increase the price of diesel fuel by 30 to 51 cents per gallon by 2017. Part of the popular, bi-partisan and totally misguided Energy Independence and Security Act, the RFS promoted increased production of various forms of ethanol and biodiesel with a host of mandates and subsidies.

The failure of advanced biofuels—especially cellulosic ethanol—to meet targets,along with the constraints of blend walls and consumer rejection of E85 gasohol, would force the oil industry to pay fines for producing fuels consumers do want and take huge losses on forced production of fuels consumers don’t want.

The chart below, from the CBO report, illustrates how miserably the mandate-it-and-they-will-make-it energy policy is failing. Proponents assured Congress and the president that commercially viable production of cellulosic ethanol made from non-edible plant material was just around the corner. Not only were they wrong, but as we see from the chart, there is no end of the tunnel in sight. On the other hand, the corn-ethanol producers responded so vigorously to production incentives that they have been meeting targets but produce more ethanol than can be blended into regular gasoline. In the industry jargon, refiners have hit the 10-percent blend wall established by the EPA to prevent damage to engines and fuel systems not designed for the moisture-attracting higher-blend levels.

Lower energy content per gallon makes ethanol fuels unattractive to most drivers. To a certain extent, this weakness was hidden because most gasoline contains only 10 percent of the lower-energy ethanol. But refiners cannot legally add any more ethanol to E10 gasoline—the most common gasoline sold, which is comprised of 90 percent gasoline and 10 percent ethanol—and cannot get consumers to buy E85 (a blend of 15 percent gasoline and 85 percent ethanol) without selling it below cost of production.

The CBO estimates that to induce enough consumption of E85 to allow refiners to meet the targets set by Washington, they would have push down the price of E85 by as much as $1.27 per gallon. The necessary losses on the E85 are what, in large part, would drive up the cost of E10 gasoline used by the vast majority of drivers.

The failure of cellulosic ethanol to meet the fantasy-world targets set years ago means that the ethanol burned in our vehicles primarily comes from diverting food to fuel—nearly 40 percent of the U.S. corn crop goes to ethanol production. So, the net effects of the RFS are to drive up farm commodity prices (and subsequently food prices), drive up the cost of diesel fuel, drive up the cost of the gasoline used by the vast majority of drivers, and provide little, at best, environmental benefit. It’s not a simple case of supply and demand where more ethanol means lower fuel costs. Understanding the complete picture is more complex. But one thing is clear: The RFS is simply a bad idea whose time to go has come.