Obama Baits ‘Do Nothing’ House, Promises Action on Border, Immigration 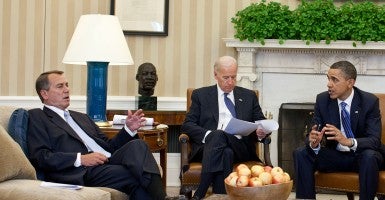 Confronting a crisis on the Texas-Mexico border and a Congress that he said won’t work with him, President Obama this afternoon announced  he will pursue reform to the nation’s immigration laws with executive action.

In passionate remarks from the Rose Garden, Obama left the door open to work with skeptical House Republicans on an immigration bill, possibly after mid-term elections, but said that until then he will act on his own.

Obama said that last week, House Speaker John Boehner told him that Republican lawmakers would block a vote on immigration reforms for the remainder of this year. Republicans  have “proven again and again that they’re unwilling to stand up to the tea party in order to do what’s best for the country,” Obama said.

The president also rebuked Republicans and other critics who have criticized his growing use of executive orders and other measures independent of Congress.

I prefer permanent fixes to the problems we face. I would love nothing more for bipartisan legislation to be put on my desk so I can sign it. I take executive action only when we have a serious problem and when Congress chooses to do nothing. In this situation, the failure to pass a darn bill is bad for security, the economy, and the future. So while I will continue to push House Republicans to drop the excuses and act, Americans cannot wait forever.

Boehner responded with a prepared statement of his own, saying, “It is sad and disappointing that President Obama won’t work with us, but is instead intent on going it alone.”

Obama said he has directed Homeland Security Secretary Jeh Johnson and Attorney General Eric Holder to “move resources from the interior to the border.” He said he asked the Cabinet officials to identify other actions the administration can pursue on its own, within  “existing legal authority.”

He expects to receive the recommendations by the end of the summer, and to adopt them “without further delay,” the president said.

Obama’s comments came on the same day he asked Congress for more than $2 billion in emergency funds to manage the surge of illegal immigrants from Central America at the Texas-Mexico border, and to speed deportation of those already here.

More than 52,000 unaccompanied children and 39,000 women with children have been caught at the southern border this year.

Today, Obama blamed the border crisis in part on the current immigration system.

“Our system is so broken and so unclear that folks don’t know what the rules are,” he said. “The humanitarian crisis on the border underscores the need to fix the system.”

David Inserra, who studies homeland security as a research associate at The Heritage Foundation, said he agrees “wholeheartedly” that the system is broken and the rules not clear:

I agree because the president has so twisted and flouted immigration law through bureaucratic and executive actions that right now the U.S. has no cohesive immigration strategy other than to selectively, not faithfully, enforce the law. Such lawless actions beget more illegal immigration and the president just announced that he is doubling down, vowing to shred more of U.S. immigration law via executive fiat.

Rep. Lamar Smith, R-Texas, a member of the Homeland Security Committee, criticized Obama for his rhetoric:

It is laughable that President Obama now is trying to point the finger at House Republicans.  We’re the ones who have been calling for border security rather than amnesty.  The president insists that the Senate amnesty bill will improve our immigration system.  But amnesty is not the answer.

Even before the surge of unaccompanied minors crossing the border into the U.S., House Republicans had said their lack of trust in the president to enforce current law would deter them from pursuing “comprehensive” immigration reform similar to what the Senate passed last year.

House leaders have insisted that they would consider border security, visa reform, and other individual aspects of the immigration system for legislative changes, rather than what they say was the Senate’s amnesty-based approach to the estimated 11 million already here in violation of the law.

One year ago Friday, the Senate passed a bipartisan bill to clear the way for millions of illegal immigrants to gain a “pathway to citizenship” — which opponents describe as amnesty. At the time, and periodically ever since, Obama put pressure on the House to pass a similar bill or create its own.

Today, Obama said he put off executive action in hopes House Republicans would act before the end of the summer. Boehner’s comments, he said, made it clear that he couldn’t wait any longer.

If you pass a bill, that will supplant what I have done administratively. Then people can make plans and business can make plans based on the law. And there will be clarity in this country and outside it.

House Judiciary Chairman Bob Goodlatte, R-Va., whose committee has responsibility for immigration reform, last evening put out a statement taking issue with the president’s words and promised actions. The call  for the Senate immigration bill to become law would “exacerbate the current crisis at the border,” Goodlatte  said.

“Many members of the House want to fix our immigration laws but President Obama’s continued abuse of his ‘pen and phone’ to act unilaterally has undermined our efforts and has also caused a trust deficit with the American people.. … By threatening more unilateral actions this summer while failing to address the issue of border security, President Obama will only worsen the crisis at the border and will further undermine Americans’ faith in [his] ability to lead.”