Compromising With Iran Is Not the Answer 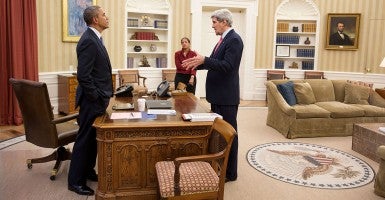 Secretary of State John Kerry recently floated a mind-numbing idea: to help turn back ISIS, the Islamic terrorist group that has seized control of more than a third of Iraq, the U.S. could enter a cooperative arrangement with the mullahs of Iran.

Yes, the administration still clings to the notion that it can advance American interests by cutting a deal with Tehran. No wonder we are losing everywhere on the foreign policy front.

True, America and Iran have a mutual interest in Iraq, much in the way a robber and a customer have a common interest in a bank. Missing the difference in desired outcomes explains the core problem of the president’s foreign policy.

The Obama Doctrine places a premium on negotiating with competitors to ameliorate conflict. There is nothing wrong with negotiating. Churchill, Roosevelt and Stalin, met at Tehran in 1943 irony there and forged a plan for winning World War II. Despite their many differences, they shared a common goal.

But not all negotiations produce success. In 1973, the U.S. negotiated the Paris Peace Accords. It failed miserably. The only goal the American and North Vietnamese shared was to get the United States out of the war. The American negotiators thought they were bargaining for “peace with honor.” The Hanoi delegation knew it was bargaining as a prelude to its 1975 invasion of the South.

President Obama’s negotiating efforts in both Afghanistan and Iraq look a lot like Paris ’73. He is looking for a way out of foreign entanglements; a lot of bad guys are happy to see him succeed.

For Obama, the deal rather than quality of the deal seems to matter most. And there’s the rub. The deals he has delivered in both Iraq and Afghanistan leave a security vacuum or the potential for future instability that can be readily exploited. When it comes to exit strategy, he has placed a premium on the “exit” rather than the “strategy.”

Of course, in addition to enlisting the aid of Iran, Secretary Kerry also wants to bomb the insurgents in Iraq.

Despite his Nobel Peace Prize, our president is not reluctant to use force. U.S. troops in Afghanistan have taken more casualties in six years under Obama than they did under President Bush. Obama also has conducted much more covert warfare in more theaters with many more drone strikes. He bombed his way into Libya and wanted to bomb Syria.

But, Obama uses force with a difference. In every case, he takes a minimalist approach ordering up the least amount of military power he felt he could get away with then following each use with extraordinary claims of success destroying al-Qaeda, winning freedom for Libya, and “forcing” Syria to the negotiating table.

Other presidents have shown restraint in employing military power. Both Eisenhower and Reagan had high regard for the armed forces, yet they employed them less in battle than most modern presidents. Obama has not been nearly as successful. None of his military adventures has turned out well let alone been decisive.

There are times for restraint in the use of armed force. There are times when it makes sense to go to the table and negotiate even with your enemies.

The problem with the Obama administration is that it lacks the strategic judgment for knowing when these are the best options. Further, the White House has become maddeningly predictable in choosing the way out of every mess.

The military and political strategies that comprise the Obama Doctrine have created space and opportunity for others to exploit the instability in Iraq and Afghanistan. The administration’s insistence on pursuing those same, failed strategies yet again makes it difficult to be optimistic about the future of either country.