Supreme Court Holds That Pro-Lifers Have First Amendment Rights, Too 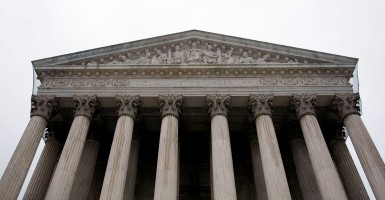 In 2007, Massachusetts passed a law that prohibited anyone from knowingly entering or remaining on a “public way or sidewalk adjacent to a reproductive health care facility within a radius of 35 feet of any portion of an entrance, exit, or driveway…” In case it’s not obvious, this law was targeted at “sidewalk counselors” and other pro-life protestors. And Eleanor McCullen is one pro-life protestor who didn’t take the law sitting down.

She and a handful of other pro-lifers who engage in sidewalk counseling by offering information about alternatives to abortion and help pursuing those options, sued in 2008 arguing that the law violated their First Amendment rights. Today, the Supreme Court of the United States unanimously ruled in their favor in the case McCullen v. Coakley and struck down the law.

The First Amendment, a bedrock in American constitutional law, prohibits the government from “abridging the freedom of speech.” Yet no right is absolute, and sometimes the government can limit speech, even in public. You can’t blast a bullhorn on a suburban sidewalk at 1 a.m., for example. These types of restrictions are called “time, place, and manner” restrictions, and the Massachusetts law was a time, place and manner restriction as well. It prohibited anyone from entering near abortion clinics during working hours, unless they had business there.

Yet even “time, place and manner” restrictions are constrained by the First Amendment.   These types of restrictions are allowed if they are content-neutral, narrowly tailored to serve a significant governmental interest and leave open alternative channels of communication. Most importantly for Eleanor McCullen, the Supreme Court held today that the Massachusetts abortion buffer zone law was not “narrowly tailored.”

Chief Justice John Roberts, writing for a unanimous Court, took Massachusetts at its word the law wasn’t intended to discriminate against speech by pro-lifers. He took it as a given that the law truly was intended to protect the safety of people entering and exiting abortion clinics. Yet to promote “safety,” Massachusetts took what the Court called “the extreme step of closing a substantial portion” of sidewalk “to all speakers.” This was, in the Court’s view, totally unnecessary and unconstitutional.

The case wasn’t a complete victory for pro-life proponents. Justice Antonin Scalia wrote a separate concurrence, pointing out that the Massachusetts law actually was targeted at abortion protestors and thus not “content neutral,” contrary to the majority holding. And Justice Samuel Alito also wrote separately to say that it wasn’t even “viewpoint neutral:” “Speech in favor of the clinic and its work by employees and agents is permitted; speech criticizing the clinic and its work is a crime.”

In other words, the Court gave a free pass to the Massachusetts lawyers who claimed that this was all about “safety,” when common sense and the court record suggest a more politicized purpose.  And the Court also failed to overturn Hill v. Colorado, another Supreme Court case that upheld a different abortion clinic buffer zone law.

Ultimately, though, this is a victory for pro-life advocates and for the First Amendment. And it is yet another 9-0 loss for the Obama administration, which weighed in on behalf of the State of Massachusetts.

Further, it puts other states on notice they cannot pass sweeping laws based on narrow justifications—if safety is the concern, pass a law that deals specifically with safety and only with safety. Don’t pass a law that criminalizes the speech of many peaceful, innocent protestors. And in those states that seek to burden sidewalk counselors and other pro-life protesters — there’s the next First Amendment lawsuit waiting to be filed.