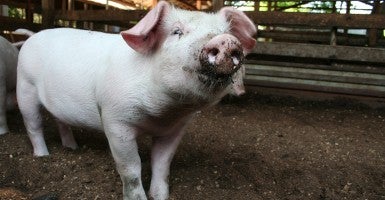 Beacon Center of Tennessee President Justin Owen said this year’s report reveals the highest amount of taxpayer waste in the publication’s nine-year history, which places blame on a large variety of state and local government entities.

So how do government officials traditionally behave when they make this infamous list? Do they show embarrassment or remorse or do they get mad and defensive?

“It’s a mix,” Owen said at a press conference Wednesday.

“I would say some realize they’re making mistakes and have started to clean up their act, but others think it’s OK to do what they’re doing, particularly on the waste side when you’re talking about spending money on stupid projects or things that aren’t wise for taxpayers.”

The Tennessee Department of Labor and Workforce Development is the recipient of this year’s “Pork of the Year,” after Owen said it handed out $200 million in wrongfully paid unemployment benefits. Felons, dead people and gainfully employed state workers were among the recipients, Owen said.

Among the wasteful projects included in this year’s report:

The colored sticks project consists of 30 arrow-like poles jutting out of the ground at different angles.

“If you do the math you’ll realize that comes at a cost of $25,000 per pole,” said Beacon Policy Director Lindsay Boyd.

The report also details how local governments and public utilities in Tennessee wasted $7.5 million more than they had last year and frequently bypassed competitive bidding requirements.

>>> Pork Belongs on the Dinner Table, Not in Government

In the report, Beacon staff members recommend their own solutions to taxpayer waste, including establishing independent commissions that would analyze the state budget line by line.