Here’s a Crazy Idea: What About Reforming Transportation Spending Instead of Hiking Taxes? 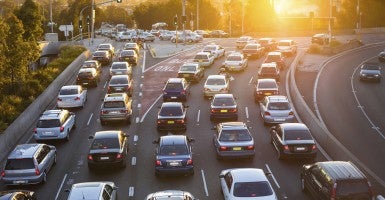 Americans know the drill. When Congress faces a gap between its spending wants and available money, it is quick to ask for more money, instead of fixing the spending side of the budget ledger.

This time it’s Senate Finance Committee chairman Ron Wyden, D-Ore., who has proposed a rag tag group of revenue provisions, including hiking taxes on heavy vehicle use, aimed at filling a hole in Washington’s Highway Trust Fund (HTF). Federal gas and diesel taxes deposited in to the HTF go to pay for road, bridge, transit, and other surface transportation projects in the states.

Yup, you got it: Wyden’s focusing on new ways to collect money – without even mentioning spending reforms.

Conservatives on the committee rightly grumbled at its total lack of spending cuts, and now the committee is going back to the drawing board to try and find more palatable reforms all around.

Wyden isn’t alone: Others in Congress have called for gas tax hikes or bailing out the fund with postal reform revenue. But few have proposed reforming spending out of the HTF. In other words, lawmakers by and large aren’t interested in, changing which programs are eligible for the federal gas and diesel taxes deposited into the HTF.

The HTF was set up to pay for the interstate highway system. That was largely completed decades ago, but past Congresses added a laundry list of newly eligible activities, such as subways, buses, metropolitan planning, bike and walking trails, sidewalks, landscaping, ferry boats and interpretive signage.. These are diversions, pure and simple. Their users, such as transit commuters, bicyclists, and pedestrians, pay nothing into the HTF but benefit from it. And money spent on landscaping and subways is spent at the expense of road and bridge improvement projects that would benefit the motorists and truckers who pay the fuel taxes.

Here’s an idea, Sen.Wyden: End these HTF diversions to parochial activities, which don’t reduce traffic congestion or enhance mobility for motorists. Doing this would free up billions of dollars annually for road and bridge projects which, according to theclaims of some special interests in Washington, are “crumbling.” These claims are exaggerated, but the point remains that the money would be available to make necessary improvements to aging parts of the system and expansions where demand exists.

While you’re at it, Mr. Chairman, how about proposing crucial regulatory reforms that would help the states stretch their transportation dollars further and reduce unnecessary project delays and cost overruns? Start by repealing the Davis-Bacon Act and eliminating duplication in onerous environmental review processes. The states, which are tired of the endless delays and unnecessarily high costs of building a road or a bridge, will thank you.

Wyden’s current proposal is reckless: It relies on 10 years of revenue to pay for six months of transportation spending. Additionally, this plan continues bailing out the HTF, violating the important ‘user pays, user benefits’ principle. That is, motorists pay the fuel taxes and should benefit, not be shortchanged.

Even aside from any merits of this particular proposal, Congress should avoid renewing highway legislation in the lame duck session of Congress. Lawmakers have a tendency to pass shoddy deals for taxpayers during such sessions.

If Congress had to live within the trust fund’s means, it would be forced to set priorities for what is truly a federal responsibility, instead of continuing to take the easy road of making everything a spending priority..