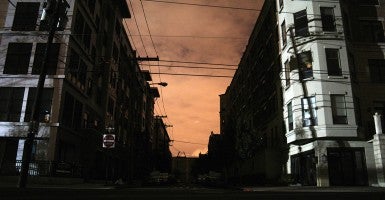 Members of Congress want to know more about whether America’s adversaries possess the capability to shut down the nation’s power grid.

The intelligence authorization bill passed by the House of Representatives on May 30 includes a provision mandating the director of national intelligence submit to Congress within six months of the bill’s passage “a report on the threat posed by man-made electromagnetic pulse weapons to United States interests through 2025, including threats from foreign countries and foreign non-State actors.”

Some fear the current North Korean regime’s goal of being recognized as a nuclear power and the apocalyptic vision of Iran’s religious leadership could motivate these nations to pursue weapons able to emit a catastrophic electromagnetic pulse of energy that could knock out the power grid and kill millions of Americans within the first few minutes of the blast.

The provision was attached as an amendment introduced by Rep. Trent Franks, R-Ariz., leader of the Congressional EMP Caucus.

“There have now been nearly a dozen federal government reports and studies on the dangers, threats and vulnerabilities the U.S. electric grid faces from EMP and GMD, including reports from the EMP Commission, Department of Homeland Security, Department of Defense, Department of Energy, the Federal Energy Regulatory Commission, the National Academy of Sciences, and the U.S. national laboratories,” Franks said.

“All of them come to similar conclusions. The U.S. electric grid is dangerously vulnerable to EMP and GMD.”

>>> Electromagnetic Pulse: The Clock Is Ticking

The Senate’s version of the bill, scheduled for a potential vote this week in the House, makes no mention of assessing threats from electromagnetic pulse weapons.

The bill is sponsored by Sen. Dianne Feinstein, D-Calif., who chairs the Senate Select Committee on Intelligence.

Nearly 52 years ago, the government detonated Starfish Prime, a 1.4-megaton nuclear weapon, 250 miles above the Pacific Ocean. The electromagnetic shockwave it emitted disrupted electricity and phone service more than 800 miles east of the blast in Hawaii.

By comparison, the combined total of all the explosives detonated in World War II is an estimated three megatons.

>>> Electromagnetic Pulse: Not If but When

Soviet scientists observed similar effects in their own high-altitude nuclear weapons tests during the Cold War, according to the testimony of a Defense Department official during a congressional hearing in 1997.

The damage from Starfish Prime resembled the effects of a shockwave of solar wind and magnetic energy sent by the sun in 1859, called the Carrington Event, which hit Earth’s upper atmosphere and caused telegraph systems to fail across Europe and North America.

The shockwave, called a coronal mass ejection, is associated with solar flares that erupt from the surface of the sun.

Understanding the threat is one thing, but protecting against it is another.

Experts have warned that although the military has been hardening its systems for years against the possibility of an attack from the Soviet Union during the Cold War, the civilian world is woefully unprepared.

A 2013 report by London-based insurance market Lloyd’s of London considered a Carrington-level geomagnetic storm to be “almost inevitable in the future,” and damages could cost the economy from $600 billion to $2.6 trillion.

The report also estimates that 20 million-40 million people in the United States were at risk of an extended power outage lasting between 16 days to as much as two years  if a Carrington-level geomagnetic storm were to occur.

Peter Vincent Pry, executive director for the Task Force on National and Homeland Security, told lawmakers on Capitol Hill during a hearing in May he believed the damages wrought by an EMP could kill as many as nine out of 10 Americans.

Pry also served in the Central Intelligence Agency, as professional staff on the House Armed Services Committee and on the Congressional EMP Commission, which was established by Congress in 2001 to research the U.S. electric grid’s vulnerabilities to an EMP attack.

The costs of upgrading the grid, by comparison, are a drop in the bucket. The Congressional EMP Commission, for example, estimated a $2 billion investment would be enough to protect the grid, approximately the same cost of the 2012 presidential election.

In testimony before the North Carolina Joint Legislative Commission on Energy Policy in December 2013, Pry told state lawmakers he estimated $10 million would be enough to protect North Carolina’s grid.

Upgrade costs appear to become even more manageable when considered on an individual ratepayer basis.

More than 3 ½ years ago, a Federal Energy Regulatory Commission study found upgrades to protect the power grid from such a blast could mean as little as 20 cents extra per month for ratepayers’ electric bills over three years.

Not willing to wait for the federal government to act on the problem, states have taken it upon themselves to protect their residents.