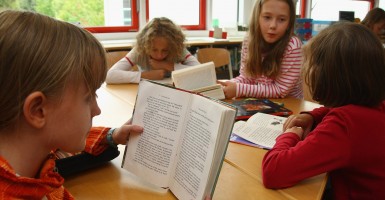 Thanks to a new law passed in the state of Tennessee, the state has left the PARCC common core consortium. (Photo: Sean Gallup/Getty Images)

Jillian Frost is a member of the Young Leaders Program at The Heritage Foundation.

Tennessee has removed itself from the Partnership for Assessment of Readiness for College and Careers testing consortium aligned to the Common Core national education standards, joining the ranks of 18 other states pushing back against Common Core.

Gov. Bill Haslam, Commissioner of Education Kevin Huffman and the chair of the state board of education, Fielding Rolston, sent a letter to PARCC CEO Laura Slover announcing the state’s decision to exit PARCC and re-adopt the old state exam, the Tennessee Comprehensive Assessment Program. This letter follows legislation passed by the state legislature and signed by Haslam in May.

The proposal requires that “the Tennessee comprehensive assessment program tests, inclusive of achievement, end-of-course and the comprehensive writing assessments, shall be administered in the subjects of English language arts and math in grades three through eleven (3-11) during the 2014-15 school year”—which will begin this fall. The proposal also requires the state department of education to craft a new state test that will be implemented by the 2015-16 school year.

Tennessee is hereby withdrawing from the Partnership for the Assessment of Readiness for College and Careers (PARCC) and will no longer be a governing state or a participating state.

Shortly after Common Core’s inception in 2009, the national standards “common to a significant number of states” were immediately incentivized by the administration with $4.35 billion in Race to the Top competitive grants and No Child Left Behind waivers. Forty-six states signed on to the standards with the agreement that they implement them by the 2014-15 school year.

But to add to the bureaucratic boondoggle, the administration also directly financed two national testing consortia, the PARCC exam and the Smarter Balanced Assessment Consortium and created a technical review panel, housed at the Department of Education.

Tennessee’s move leaves only 16 states and the District of Columbia remaining in the PARCC testing consortium — down from the original 25 states.

SBAC also is seeing a decline in membership. Of the 31 original states that adopted the assessments, 25 remain.

In total, 19 states have now pushed back against the Common Core—including four that have now exited the standards completely. As the fall implementation deadline looms near, states are taking the chance to reclaim their standard-setting autonomy.