A Carbon Tax Is a Terrible Idea. Here’s Why. 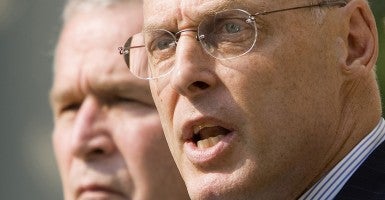 Former treasury secretary Henry Paulson is calling for a “fundamentally conservative” carbon tax to address the risks of a climate bubble.

Writing in the New York Times, Paulson relates his time in office to today’s climate, writing that “I was secretary of the Treasury when the credit bubble burst, so I think it’s fair to say that I know a little bit about risk, assessing outcomes and problem-solving.”

But it’s laughable to say that the future state of the global climate should be a concern akin to the financial crisis in 2008. Paulson argues the burning of fossil fuels is the driver of irreversible global warming and climate observations are ahead of what climate models predicted, such as melting Arctic and West Antarctic ice could lead to 14-foot level sea increases.

Let’s set the record straight on Paulson’s climate assertions. First, sea level is increasing, but accelerating sea-level rises is not what the data tell us. Second, all sea ice around the world is actually above average and, for this time of year, it is at its highest level in 30 years, which is the third-highest on record. Third, climate models haven’t been so great at projecting what a doubling of carbon dioxide in the atmosphere will actually do to global temperatures. The models didn’t get the past 17 years right, who’s to think they can accurately project 100 years out? Fourth, even if the purported sea level rise Paulson speaks of is accurate, it will occur over centuries, leaving ample time to adjust as necessary.

A carbon tax is not going to mitigate warming and won’t make a lick of difference when it comes to natural disasters.

Paulson’s other climate arguments fall short, too, as he points to “a future with more severe storms, deeper droughts, longer fire seasons and rising seas that imperil coastal cities.” The problem with that argument is largely twofold. As indicated by the Intergovernmental Panel on Climate Change, there haven’t been significant trends for hurricanes, droughts, floods or tornadoes. The case that manmade emissions are driving more frequent and intense weather events is bogus.

But let’s pretend Paulson isn’t wrong on the problem. His purported solution of a carbon tax would be an enormously high, regressive energy tax that would needlessly destroy jobs and economic growth for no noticeable impact on global temperatures. A carbon tax is not going to mitigate warming and won’t make a lick of difference when it comes to natural disasters. Further, an assumption exists that if the United States takes the lead, other developing nations will follow suit. But if we play follow the leader, we’re going to turn around and find no one there.

Paulson claims that without a carbon tax, we’ll all be paying for the damage of climate change “many times over” and that we’re going to leave the world in a worse state for our grandchildren. But in fact, a carbon tax would hurt our grandchildren. More than 80 percent of America’s energy needs are met through carbon-emitting conventional fuels. If we have less access to those fuels, our economy will suffer.

As my colleague David Kreutzer writes,

Paulson is correct in saying there’s uncertainty in the risk and magnitude of climate change:The climate is always changing and there’s uncertainty with regard to the drivers and magnitude of climate change. But the reality remains that the planet is not heading toward catastrophic warming. And even if it were, an exorbitant, un-conservative carbon tax would cripple us economically without impacting climate whatsoever.