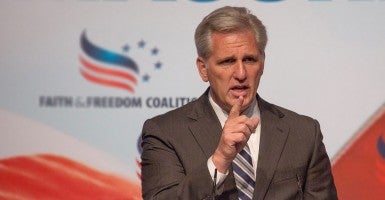 Today was supposed to be the day supporters of the Export-Import Bank struck back.

After weeks of disappointing news and dimming prospects for the bank’s reauthorization, the U.S. Chamber of Commerce and National Association of Manufacturers picked Monday to roll out an “all-hands-on-deck” public-relations campaign in favor of the government agency.

The leaders of both organizations—Thomas J. Donohue, president and CEO of the chamber, and Jay Timmons, NAM’s president and CEO—instead find themselves facing an even bigger hurdle to what they call “a top priority for American businesses.”

In an interview yesterday with Chris Wallace on “Fox News Sunday,” incoming House Majority Leader Kevin McCarthy, R-Calif., shook up the status quo with his opposition to the bank’s reauthorization.

Asked by Wallace if the taxpayer-supporter bank should close, McCarthy gave a straightforward answer: “Yes, because it’s something that the private sector can be able to do.”

The latest development, wrote the Washington Examiner’s Tim Carney, is “the biggest blow yet to the imperiled subsidy agency whose charter expires this fall.” In an instant, Washington’s presumption about the bank’s future shifted  from likely reauthorization to the unknown.

McCarthy supported the bank’s reauthorization just two years ago. And his predecessor as majority leader, Eric Cantor of Virginia, helped broker a deal in 2012 to extend the bank’s life.

Had he survived his Republican primary two weeks ago, Carney noted, Cantor could have bypassed the Financial Services Committee—where Chairman Jeb Hensarling, R-Texas, is firmly opposed to reauthorization—and brought the issue to the floor for a vote once again.

But a little-known economics professor named Dave Brat changed all that on June 10 when he toppled Cantor, setting off a chain reaction that vaulted McCarthy to the No. 2 spot in GOP leadership.

McCarthy was likely mindful of the anti-cronyism theme of Brat’s race, Carney surmises. He also has signaled that he will give deference to committees—in this case, Financial Services—allowing Hensarling, who passed on a leadership race against McCarthy, the latitude to shape the bank’s future.

House Speaker John Boehner, R-Ohio, echoed that approach in the wake of McCarthy’s announcement: “Boehner has been clear that this is an issue that members, particularly on the Financial Services Committee, need to discuss, and that is happening,” Michael Steel, a spokesman for Boehner, told the Wall Street Journal.

McCarthy’s stated opposition comes at a critical moment—Hensarling’s committee is holding a hearing on the issue Wednesday and the bank’s charter expires Sept. 30. It also happened just one day before the joint Chamber of Commerce–NAM public-relations effort.

A spokesman for the chamber told the Wall Street Journal the situation was now urgent: “This is an all-hands-on-deck effort right now because we are really at a very critical time given the bank’s charter expires at the end of September,” said Christopher Wenk, senior director of international policy at the U.S. Chamber of Commerce.

In a statement provided to The Daily Signal, the chamber added:

The Export-Import Bank is a vital tool for American companies of every size, sector and region. On behalf of the many businesses that use Ex-Im, we will continue to make the case to lawmakers about the job creation and growth opportunities that the bank provides—without costing taxpayers a dime.

The Heritage Foundation’s Diane Katz rebutted that last claim, among others. In a recent column citing a Congressional Budget Office analysis, Katz wrote that “Ex–Im programs actually operate at a deficit that will cost taxpayers some $2 billion in the next decade (in addition to the bank’s operating costs).”

Other supporters of the bank vow to move forward despite the setback with McCarthy.

“Allowing the Ex-Im Bank to close would be a gift to our competitors and would result in the loss of manufacturing in the United States,” said Linda Dempsey, NAM’s vice president of international economic affairs. “If Congress fails to take up a reauthorization bill, people are going to lose their jobs, businesses and supply chains around the country will be impacted, and constituents are going to want to know why.”

The bank’s critics, which include Heritage Action for America, hope McCarthy’s public stance signals a change in the Republican Party.

“If Republicans are going to win in November and in 2016, they need to differentiate themselves by fighting against special interests and corporate welfare,” said Dan Holler, Heritage Action’s communications director. “This is an encouraging sign they are finally starting to get the message and it is more evidence of the impact the tea party has had on politics and policy.”