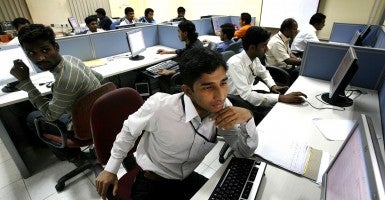 Yet another business is moving abroad to escape America’s high tax rates.

Medtronic, one of the world’s largest medical device companies, recently acquired Covidien for $42.9 billion in a move that will relocate headquarters from Minneapolis to Ireland.

“That’s how it works,” Jim Cramer of CNBC’s Mad Money said. “You buy a company that’s legitimately headquartered in a lower-tax country, even if it does all of its business here, and then you can get out of paying the higher U.S. taxes.”

Dubay pointed to the merge of Medtronic and Covidien as the most recent proof of his claims.

>>> A Territorial Tax System Would Create Jobs and Raise Wages for U.S. Workers

“We are the only developed country in the world that attempts to tax the foreign earnings of our businesses, and we do so at the highest rate in the industrialized world,” Dubay said.

This fact is proving detrimental. As companies leave the United States to remain competitive, U.S. workers, the economy and the communities the businesses leave behind suffer.

“U.S. businesses will keep moving abroad as long as Congress fails to move to a territorial system,” Dubay said.