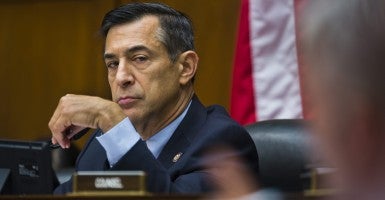 Issa believes that O’Connor may have known about the missing emails long before lawmakers.

Earlier this week, the Internal Revenue Service revealed that Lerner’s hard drive crashed and had been discarded, likely placing the lost emails forever out of reach to investigators.

A veteran Washington legal strategist, O’Conner was brought on to provide special counsel to IRS Commissioner Danny Werfel. From May until November of last year, O’Conner helped “navigate the scandal over [the IRS’s] reviews of conservative organizations,” according to a Wall Street Journal article quoted by Issa.

Serving in this capacity, O’Connor had access to IRS correspondence relevant to the investigation. Testifying before the Oversight Committee last November, IRS Chief Counsel William Wilkins referred to O’Connor specifically as “the key supervisor” responsible for processing the committee’s requests for material.

This position now places O’Connor in the thick of the committee’s investigation. In his letter, Issa wrote:

Given your prominent role in supervising the IRS’s document review and production processes, you likely knew or should have known that the IRS was missing a portion of e-mails sent or received by Ms. Lerner responsive to the Committee’s subpoena.

A former partner at WilmerHale, the second largest law-firm in Washington, D.C., O’Connor has weathered numerous legal storms. Before entering private practice, the lawyer helped defuse congressional inquiries into activities of the Clinton administration. In addition to advising the IRS, O’Connor also worked with the U.S. Department of Health and Human Services during the Obamacare rollout.

In May, the White House announced O’Connor would join the administration. W. Neil Eggleston, White House chief counsel, said O’Connor is “uniquely qualified for the position.”