Care About Religious Liberty? Meet the Most Important Law You’ve Never Heard Of 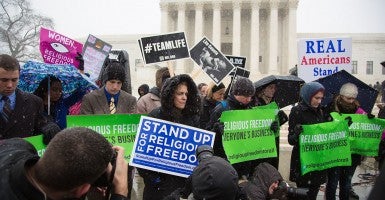 Protestors against the ObamaCare contraception mandate gather to pray outside the United States Supreme Court in March. (Photo: Jeff Malet/Newscom)

By now, most have heard of the blockbuster cases before the Supreme Court this month involving religious liberty and the Obamacare HHS mandate. By the end of June, the Court is expected to rule on Hobby Lobby’s challenge to the requirement it provide coverage of abortion-inducing drugs and devices in its employees’ health plans.

But few Americans know of an important federal religious freedom law that, together with the Constitution’s protection of free exercise, should be protecting Hobby Lobby from government fines.

From the beginning of the HHS mandate and its narrow religious exemption, the Obama administration essentially has argued faith should remain a private affair. That is, we are free to practice our beliefs in our homes or places of worship, but step outside those four walls to build a business or serve others and our religious freedom ends.

This is not consistent with the protection of religious freedom enshrined in our nation’s founding and defended in laws such as the federal Religious Freedom Restoration Act.

RFRA was a response to the Supreme Court’s 1990 decision in Employment Division v. Smith, which narrowed protections for the free exercise of religion. Following that decision, Congress sought to restore the robust protection Americans enjoyed before the Smith decision.

RFRA was the result. Enacted in 1993, it prohibits substantial burdens on religious exercise unless the government can show a compelling interest in burdening religious liberty and does so through the least restrictive way possible.

Support for RFRA in Congress was broad and bipartisan. Sponsored by then-Rep. Charles Schumer, D-N.Y., the late Sen. Edward Kennedy, D-Mass., and Sen. Orrin Hatch, R-Utah, RFRA passed 97-3 in the Senate and by unanimous voice vote in the House.

Outside Congress, a diverse, 68-member coalition of religious liberty advocates and policy organizations supported the law, including the American Civil Liberties Union, National Association of Evangelicals, Americans for the Separation of Church and State and many other organizations that represented Jewish, Muslim, Sikh, Christian and other faiths.

The strong consensus behind protecting this first freedom was captured by then-President Bill Clinton, who said when he signed the law, “[T]his event assumes a more majestic quality because of our ability together to affirm the historic role that people of faith have played in the history of this country and the constitutional protections those who profess and express their faith have always demanded and cherished.”

In light of the great diversity of religious belief in the United States, it only makes sense to provide reasonable accommodations for individuals to live out their faith at home, in worship or at work.

“RFRA simply makes religious liberty the default position, which is as it should be for a country that values religious liberty,”said Kim Colby, director of the Center for Law and Religious Freedom at the Christian Legal Society, during a congressional hearing last week.

That default of protecting a fundamental freedom has benefited many Americans during the last two decades, including those of minority faiths.

As Jasjit Singh, executive director of the Sikh American Legal Defense and Education Fund explained: “RFRA means myself, my brothers, my sisters, my mom, my dad, we can all participate in American life in the way we had dreamed and really the way it is promised as written out in the Constitution. We have an opportunity to get jobs and to fully integrate within American society without having to sacrifice or compromise any part of our religious identity.”

Despite its strong deference to religious freedom, RFRA doesn’t allow individuals to do whatever they wish in the name of religion. The law is simply a commonsense way of balancing government interests with the fundamental freedom of individuals to live out their faith.

As Sen. Kennedy said, “[RFRA] creates no new rights for any religious practice or for any potential litigant. Not every free exercise claim will prevail.”

There will be times when the government can show it has a compelling reason for burdening religious expression—to ensure public safety, for instance. But RFRA sets a high bar for the government to meet in order to restrict religious freedom.

Importantly, religious freedom doesn’t just include what people do in private or at weekend worship services.

Our conception of religious liberty provides all Americans the freedom to seek the truth, form beliefs and live according to the dictates of their conscience. The fundamental beliefs that help us make sense of the world, as well as the convictions that guide our lives, cannot be lightly discarded.

But religious liberty can only be meaningful if it applies to everyone—not just those the government deems worthy. Which is why all Americans should hope the Supreme Court rules against the Obama Administration’s narrow view of faith.