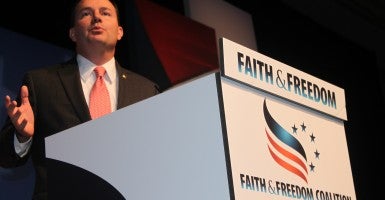 Three prominent Republican senators – all rumored presidential candidates in 2016 – today projected their visions for the future of the party during the first day of the Road to Majority conference in Washington.

Utah’s Mike Lee, with perhaps the lowest public profile of the three, used his limited microphone time to say that, if conservatives were to wrest control of the Senate and White House, the GOP must advance meaningful policy rather than simply roll back existing law.

Marco Rubio of Florida worked to strike a personal connection with the audience in a basement ballroom of the Omni Shoreham hotel.

Rubio once again told the rags-to-riches tale of his parents, who emigrated from Cuba and raised a famous politician, to make the larger point about the importance of maintaining traditional American values. He criticized the nation’s education system and the high cost of college, and, surprisingly to some, took jabs at big business.

Then came Ted Cruz of Texas, who worked the ballroom as if it were a town hall meeting, characteristically circling the stage like a boxer and avoiding the podium. Cruz riled up the crowd by warning of a political landscape and society that threatens liberty.

But, Cruz said, “leadership will bring us back from the precipice.”

Below, The Daily Signal highlights some quotes and other moments from the senators at the opening of the three-day Road to Majority conference, sponsored by the Faith and Freedom Coalition and touted as the “premier event for people of faith and conservative activists.”

To enact conservative policies, we will need conservative majorities in the House and Senate, but this alone is not enough. To fix our broken government it’s not enough simply to roll back ineffective policies that concentrate power in Washington—we must also roll out bold conservative reforms that empower the people closest to the problems to test and refine solutions that work best for their communities.