Why We March for Marriage 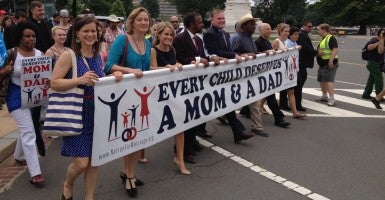 Today thousands gathered on the National Mall for the second annual March for Marriage. Organized by the National Organization for Marriage, the rally provides a platform for Americans to make their voices heard on behalf of marriage as the union of one man and one woman, even as federal judges have disregarded the votes of millions in striking down a number of state marriage laws.

The rally featured former Sen. Rick Santorum, former Gov. Mike Huckabee, New York  Democrat state senator Rev. Ruben Diaz and Rep. Tim Huelskamp, R-Kan. The crowd was full of young faces and signs declaring “Cada ni?o Se merece un papá y una mama” (“Every child deserves a mom and a dad”). Marriage leaders from around the world joined the crowd, including Ludovine de la Rochère, who helped organize the massive rallies for marriage in Paris, and others who came from as far as Australia and Malawi.

I had the opportunity to speak to the crowd just before we marched to the Supreme Court:

Throughout our nation’s history, millions of people have come here to the capital and to this mall to stand for what is right, and true and good. They’ve marched for life and liberty and justice.

But you can’t get much more foundational than what we are marching for here today in the shadow of the Capitol.

Marriage is one of the most basic goods human beings have ever known. Today we march to uphold that good.

That’s why marriage has been set apart in culture and in law from all other kinds of relationships.

No one should be denied the freedom to speak and to act publicly in accord with the truth that marriage is the union of a man and a woman.

Should a religious foster care and adoption agency have to violate its commitment to placing children with a married mom and dad?

Should a Christian wedding photographer be forced to celebrate a ceremony that conflicts with her beliefs?

Should someone like Brendan Eich lose his job for standing up for marriage?

All Americans have the right to live freely. But no one has the right to force us to act contrary to our beliefs.

Today we are engaged in a great debate about the most basic institution of human life. The conversation about what marriage is and why it matters is only just beginning. We should not allow it to be silenced before it starts.

The courts should not take away our authority as citizens to debate and decide marriage policy.

Those of you here at the March for Marriage are helping to make sure the voices of millions of Americans are heard.

Now, more than ever, we need to raise our voices to make clear why marriage matters – for children, for civil society and for America’s future.

Everyone who believes that marriage is between one man and one woman must stand up, speak out, and spread the word.

Thank you for coming to Washington to do that today.