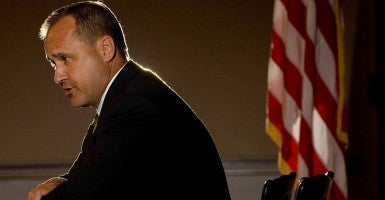 Jim Nussle, former director of the Office of Management and Budget, is wrong to argue against fair-value accounting for the Export-Import Bank. (Photo: The Washington Times/ZUMA Press/Newscom)

The Wall Street Journal in recent days has published a variety of opinions on congressional reauthorization of the Export-Import Bank—which doles out subsidies to foreign firms to purchase U.S. products. Most of the arguments—pro and con—merit polite consideration. But others require a response.

Such is the case with the June 17 letter to the editor from Jim Nussle, a former congressman who also served as director of the Office of Management and Budget before establishing a lobbying firm. In this letter, Nussle argues against the newspaper’s support of “fair-value” accounting for Ex-Im.

Ex–Im uses “accrual” accounting, which does not factor in the risk of defaults related to bank financing, as is done in fair value accounting. Ex-Im only calculates its future revenue stream from loan repayments based on interest rates tied to Treasury securities. It does not adjust the amount of anticipated revenue for changes in the market or business failures that would result in reductions in repayment. These risks are considered under more accurate “fair value” accounting – the method required of private banks and supported by the Wall Street Journal.

Under current accounting methods, bank officials claim that Ex-Im will return a $14 billion surplus to taxpayers in the next decade. But in a major embarrassment for the bank and its allies, the Congressional Budget Office reported last month that Ex–Im programs, if subjected to the fair value accounting methods required of private banks, actually operate at a deficit that will cost taxpayers some $2 billion over 10 years (in addition to the bank’s operating costs).

The Peterson-Pew Commission on Budget Reform, on which Mr. Nussle served, called for the use of fair value accounting by government agencies that provide loans and credit. He subsequently endorsed the commission’s conclusions in his 2011 testimony before the House Budget Committee.

Mr. Nussle’s June 17th letter claims that fair-value accounting is inappropriate for Ex-Im because “private lenders have different administrative costs and default rates that are factored into their prices.”  But Ex-Im’s generous subsidies flow to the very same types of companies that are financed by private banks and investors. They also are subject to the very same market forces that affect the credit risk of private lenders. To the extent that Ex-Im financing supplants private investment, its performance should be measured by the same fair-value metrics as the banks it is displacing.

As noted by the Pew Commission:

Two decades of experience with accrual treatment of federal credit has demonstrated that current valuation rules understate the subsidies that government provides through direct and guaranteed loans and other activities that shift risk to taxpayers. To correct this understatement, the budget should use fair-market values in calculating costs for financial guarantees, insurance, direct loans, loan guarantees, and programs that invest in risky financial assets. Fair value accounting would make clear that the federal government cannot invest in risky assets more cheaply nor earn a higher rate of return than do private firms or   individuals. Ultimately, taxpayers bear all the costs of investing, and this fact should be explicitly reflected in the budget.

Indeed, there is no reason to think that Ex-Im experiences fewer defaults than the private sector—particularly in light of the fact that both the Inspector General and the Government Accountability Office have repeatedly documented lapses in the bank’s management of risk.

The letter also criticizes as excessive the CBO’s assumptions about the future growth of Ex-Im subsidies. But all accounting requires assumptions of various sorts. In this case, aggressive growth of Ex-Im authorizations is a reasonable assumption considering that it has more than doubled in recent years, and the Obama administration is seeking to increase its lending cap by $20 billion.

A variety of experts have long argued that fair value accounting is more accurate—and thus more appropriate—for government programs such as Ex-Im that provide financing to private businesses. As noted in the Harvard Business Review, for example, fair value accounting is used extensively under both the Generally Accepted Accounting Principles in the United States and International Financial Reporting Standards, adopted by nearly 100 countries worldwide. Price Waterhouse Coopers, for its part, characterizes fair value accounting as “the most effective method to reflect the economic realities of market conditions.”

Heated as the debate is over accounting methods, it is only one of the flash points over Ex-Im’s reauthorization. As repeatedly documented by the Inspector General and GAO, the bank is a conduit for corporate welfare beset by unreliable risk management, inefficiency, and cronyism. It effectively ignores the impact of its actions on American worker; its subsidies leave domestic companies at a competitive disadvantage against foreign firms bankrolled by the U.S. government.

Despite overwhelming evidence to the contrary, proponents are trying very hard to convince lawmakers that Ex-Im subsidies are safe and lucrative “investments.” If so, they should embrace the transparency provided by fair value accounting. In any event, Congress should take note of the CBO’s projection of losses. Rather than perpetuate Ex-Im cronyism, lawmakers should allow the bank’s charter to expire and undertake tax and regulatory reforms that would strengthen the competitive position of all U.S. businesses.