24 Things the Media Claim Were Caused by ‘Global Warming’ 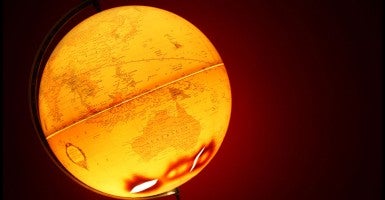 It seems like with global warming embedded in our politics (for now), anything we don’t fully understand can now be ‘legitimately’ blamed on the weather. Forget the trusty old excuse about the dog eating your homework: A sampling of news stories tells us instead that global warming might really be the cause of all our problems. Allegedly, thanks to global warming:

Your breakfast got even less exciting. Your morning coffee is going to be more expensive. Also, the cost of cereal could climb by as much as 30 percent because of global warming according to an Oxfam report(their recommendation to General Mills and Kellogg’s: “intensify” effort to cut greenhouse gases, which ironically would also likely increase the cost of cereal and beverages). Thankfully, populations of feral cats and dogs are liable to increase, and these could suffice as possible “bridge food” for climate change refugees.

History and culture have been redefined. Leonardo DiCaprio’s Jack Dawson didn’t make it off the Titanic in 1912 thanks to global warming. Two years later the world engaged in WWI, followed by the Great Depression, and WWII, all of which apparently slowed the pace of global warming. In current cultural events, the arts world has been subjected to climate change…the musical. And a horror movie. Some congregations have been subjected to a new topic for bad sermons. And employees are less productive at work.

America’s adversaries have been aided. Climate change has boosted Russian rice, corn and sunflower seed crops and promises to unlock some of the natural resources trapped in Siberian permafrost. And rather than failed diplomacy, climate change was the catalyst for Boko Haram. Meanwhile, North Korea has emerged as an example of combating climate change.

Nature got a little bit wilder. Salamanders are shrinking in size, but the return of bus-sized snakes is more likely. Meanwhile the coquis frog in Puerto Rico croaks a little higher, butterflies in Ohio are showing up a bit earlier, and there is an abundance of rock snot in West Virginia streams and not enough tissues to deal with it. It also has been discovered that global warming killed a 16-year-old polar bear (even though the average lifespan of a polar bear is 15-18 years).

Vacation plans are being ruined. Airline passengers might want to use those seatbelts on their next flight because of greater turbulence. Thanks to global warming, life in Asia is generally miserable and England will be too wet, and too dry…and too cold…and too hot. That hike you may have been planning to the peak of Mt. Everest will be harder, in case it wasn’t hard enough already, and out of good eco-conscience you probably shouldn’t run another marathon because of all the unnecessary CO2 emissions. And the migration of the Baird’s sparrow away from North Dakota to Canada is threatening to cut into the hordes of tourists coming to bird watch.

What has been called the dangerous, more expensive, more uncertain future of climate change may in fact just be climate, which always changes.  Nevertheless, the Obama administration wants to implement costly global warming regulations that not only will have almost zero impact on global average temperatures, but also will  drastically change for the worse how Americans access and use energy, an important building block of the American economy and quality of living

Now that’s a real problem—one Congress actually can do something about.