California Can’t Convince Drivers to Trade in Clunkers for Cash 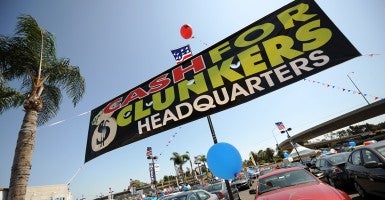 California is paying drivers to get their air-polluting cars off the road—and will throw in some cash to get a newer, more fuel-efficient model.

But during its first year, only 21 Californians have actually gotten a new vehicle from this cash-for-clunkers-esque program.

Government employees even sent out more than 12,000 letters notifying people they were eligible for a portion of $3 million set aside for vehicle replacement. The complicated process and low cash incentives, however, turned many away from getting these benefits.

After the low participation rates of the first year, the program was temporarily suspended, and remains so until the guidelines are rewritten for the program and it launches again in 2015.

Yet lawmakers simultaneously extended the program’s funding until 2024, and called for the incentive amount, which is currently at $2,000 or $2,500 for low-income participants, to be increased.

This little-known pilot program focused in Southern California is part of the Enhanced Fleet Modernization Program run by the California Air Resources Board, which aims at improving air quality by getting high-polluting cars off the road.

By encouraging people to get a newer car sooner, you can speed up one’s decision to get a new car, and consequently they stop driving an older car that’s putting out more environmentally-damaging emissions, said John Swanton, communications director for the state Air Resources Board.

Older vehicles disproportionately pollute California’s air. Over half the pollution is caused by an estimated 10 percent to 15 percent of the oldest cars on the road.

Free-market transportation experts don’t think this approach is the most effective, though.

“I think these programs are misbegotten anyway since they are only slightly hastening the inevitable,” said Randall O’Toole, senior fellow at the Cato Institute. “Old cars wear out, and the new cars that replace them are more fuel efficient.”

If passed, Senate bill 913 will require the Air Resources Board to post program participation goals on its website, and inform the General Assembly of progress toward these goals.

“There are a number of higher-polluting vehicles that can be removed from our roads and help meet the air quality emissions goals,” said Jeff Macedo, communications director for California Sen. Anthony Cannella, who co-authored the legislation.

The modernization program gets $30 million from the state each year. Most of these funds go toward the 3-year-old car retirement portion of the program, which has been more successful than the replacement initiative.

The environmental benefits of this program are questionable, however.

More than 60 percent of the vehicles retired were unregistered. This figure suggests many of the scrapped cars were not being driven on the road anyway, thus scrapping them may not have helped the environment as much as projected.

“This is another example of a feel-good government program that fails miserably when measured for its effectiveness,” Jon Coupal, president of the Howard Jarvis Taxpayers Association, said of the replacement portion of the program. “The overhead costs of programs like this always exceed the benefits confirmed from them.”