The Surprising Ingredient for Bipartisan Reform: Hit Show ‘Orange Is the New Black’ 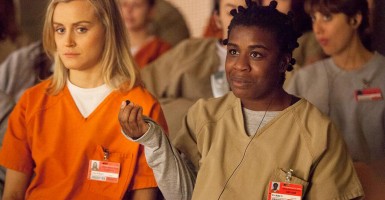 Alayna Ackerman is currently a member of the Young Leaders Program at The Heritage Foundation.

For most Americans, the Netflix show “Orange is the New Black” is the closest they will ever come to experiencing the criminal justice system.

Americans see the imprisoned female characters killed, starved and driven mad by prison conditions. For many viewers, the show provides a spooky wake up call to the all-too-disturbing reality of mass incarceration.

Between 1980 and 2012 incarceration rates have more than doubled in the U.S. and are now more than six times that of the typical nation in the Organization for Economic Cooperation and Development.

These high levels of incarceration come at a steep price: On average in 2012, it costs more than $29,000 per year to house an inmate in federal prison. In 2008, California spent $47,102 per inmate per year. According to the Hamilton Project, “each U.S. resident on average contributed $260 to corrections expenditures in 2010, which stands in stark contrast to the $77 each resident contributed in 1980.”

It’s not just “Orange is the New Black” viewers who are beginning to feel uneasy and morally troubled about the current U.S. prison system. Americans on both sides of the aisle – including those in Congress — are beginning to realize that a large increase in the U.S. incarceration rate over the past three decades is costly not only in terms of explicit expenditures, but in terms of collateral social consequences as well.

An individual needs social, human and financial capital to move upward economically – and incarceration is devastating for those who hope to achieve the American dream.

If a student is jailed, the odds become significantly slimmer that he will graduate from high school: “Juvenile incarceration is estimated to decrease the likelihood of high school graduation by 13 percentage points and increase the likelihood of adult incarceration by 22 percent,” reported a 2013 MIT study. Another study, by Pew, found that “serving time reduces hourly wages for men by approximately 11 percent, annual employment by 9 weeks and annual earnings by 40 percent.”

When it comes to social capital—arguably the most important contributor to economic mobility—those  who have been imprisoned also are hurt.  More than 50 percent of fathers and mothers imprisoned were primary earners for their children. Young adults who are incarcerated miss a time when they should be acquiring work skills, getting married and starting a family, as well as achieving other milestones of adulthood.

A bipartisan group of senators are attempting to address these trends through the proposed Smarter Sentencing Act of 2014. The bill, whose co-sponsors include Democratic Sens. Dick Durbin of Illinois, Patrick Leahy of Vermont and Republican Sens. Mike Lee of Utah, Ted Cruz of Texas and Rand Paul of Kentucky, aims to reduce mandatory minimums for lower-level federal drug charges and provide judges with more discretion in this sentencing arena.

Currently, most judges must give those convicted of certain crimes no less than a specified amount of time in prison. Often these sentences are offered regardless of the circumstances surrounding the crime. The legislation also would apply the 2010 Fair Sentencing Act retroactively, allowing district courts to reduce the sentences imposed on crack cocaine offenders convicted before the FSA became law.  Ultimately, the bill would focus more of the nation’s limited federal resources on the most serious offenders, particularly those convicted of violent crimes. Heritage experts Evan Bernick and Paul Larkin wrote that the Smarter Sentencing Act “address­es perhaps the most troubling aspect of mandatory minimums—their capacity to impose arbitrary and unduly severe sentences on relatively low-level offenders in controlled substances cases.”

This bill could incentivize states and local governments to change their own sentencing structures and even to offer social programs to provide means of re-integration for released inmates into society and lessen their likelihood of returning to prison.

It’s time to stop accepting our current incarceration system as the status quo. Viewers of ‘Orange is the New Black’ and other Americans should push for the end of our current structure that promotes over-criminalization and for sentencing reform.