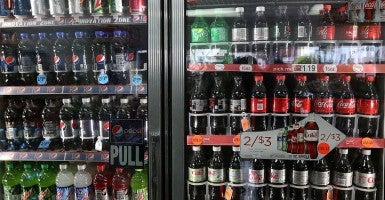 Prohibiting federal food stamp dollars from being used to buy sodas and sugary beverages could slash obesity and Type 2 diabetes in recipients, claimed a new study in Health Affairs.

Modeling from a sample of 19,000 Americans receiving benefits from the Supplemental Nutrition Assistance Program, researchers found a ban on soda and sugary beverages would be more effective in combating obesity-related diseases than giving recipients an extra 30 cents for every $1 spent on fruits and vegetables.

The soda ban would prevent some 141,000 children and another 281,000 adults from becoming obese, said the study authors from Stanford University and the University of California. They also found it would reduce Type 2 diabetes, which typically results from obesity, by 2.3 percent in adults receiving food stamps.

More than 46 million Americans receive SNAP benefits, according to the latest figures from the Department of Agriculture.

Several medical groups and nutritionists have criticized that SNAP recipients can buy sodas and energy drinks with taxpayer-funded benefits, saying the drinks do not provide any substantive nutritional value. The American Beverage Association told CNNMoney.com the study’s obesity reduction rates were “insignificant,” and that the measure would do little to reduce America’s growing obesity rate or federal spending.