Obama Calls Out ‘Millionaires’ to Pay for Student Loans 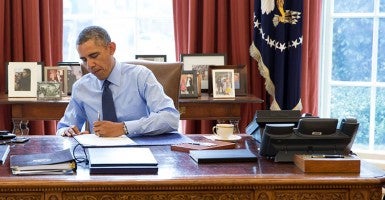 Using his pen again in “this year of action,” President Obama today took executive actions to ease the burden of student debt at the expense of “millionaires.”

The program, “Pay as You Earn,” expands an existing federal loan option available to undergrad and graduate students. It issues caps on monthly loan payments at 10 percent of the borrower’s discretionary income and forgives their remaining balance after 20 years.

>>> Check Out: The Government’s Bailout of College Grads Continues

For those working in public service or the government, any remaining debt is forgiven after 10 years. An estimated 5 million more borrowers will become eligible under the new plan. Before today, only those who took out loans after 2007 were entitled to “Pay as You Earn” benefits.

To finance the program, Obama proposed closing “tax loopholes” for the wealthy, or what he called “millionaires.”

“This should be a no-brainer,” he said today at the White House. “It would be scandalous if we allowed those kinds of tax loopholes for the very, very fortunate to survive while students are having trouble just getting started in their lives.”

“Millions of federal loan borrowers—from young adults to senior citizens—are struggling to repay their student loans,” Martin said. “The steps that President Obama announced today will make it easier for borrowers to meet their obligations without the strain and worry of excessive monthly payments.”

Less celebratory was House Speaker John Boehner, who  responded with a statement saying, “Today’s much-hyped loophole closure does nothing to reduce the cost of pursuing a higher education or improve access to federal student loans, nor will it help millions of recent graduates struggling to find jobs in the Obama economy.”

Obama’s decision to bypass Congress with a presidential memorandum snubs Senate Republicans, who are debating alternative approaches they believe would address the fundamental causes of rising tuition costs. The president’s action lasts only as long as he is in office.

Instead of addressing the root of the problem, the senators argue, granting more students access to federal education subsidies gives colleges and universities the green light to continue raising tuition costs.

“Repayment caps such as those offered through IBR and other policies put no downward pressure on college prices,” said Lindsey Burke, the Will Skillman education fellow at The Heritage Foundation. “Transferring the burden of student loan financing from university graduates—who will earn significantly more over the course of a lifetime than someone with a high school diploma—to the three-quarters of taxpayers who do not hold bachelor’s degrees is inequitable.”

Obama said the financial burden of the new “Pay as You Earn” installments will fall on “millionaires,” meaning higher income taxes for higher earners. “I want Americans to pay attention to see where their lawmakers’ priorities lie here:  lower tax bills for millionaires, or lower student loan bills for the middle class.”

Secretary of Education Arne Duncan told reporters at the White House that the administration doesn’t currently know how much the expanded payment cap will cost. “We’ll figure that out on the back end.”

Over the past 30 years, average tuition at a public four-year college has more than tripled, the White House said, while family income has largely remained stagnant. An analysis by the Federal Reserve Bank of New York found that recent college graduates in the United States face a more challenging job market, which has left them overqualified and underemployed.

Sen. Lamar Alexander, R-Tenn., ranking member of the Senate Committee on Health, Education, Labor, and Pensions, said the president’s time would be better spent on measures to increase employment. “Republicans are ready to offer and debate our proposals to create more good jobs and to create better schools which mean better jobs,” Alexander said.

Editor’s update: This story was updated at 10 a.m. June 10 to clarify that President Obama signed a memorandum, not an executive order.