There’s an Intelligence Crisis at the White House 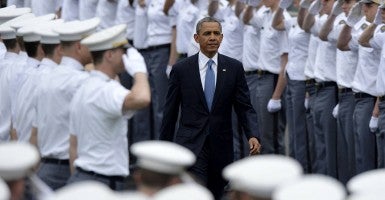 With U.S. foreign policy in the doldrums on every front, President Obama’s handlers decided it was time for action. And, so he jetted to Afghanistan to spend Memorial Day with the troops.

The fly-in to Bagram Airfield was only the first “photo op.” Two days later the president convened a Rose Garden press conference to announce his decision regarding future U.S. troop levels in Afghanistan and his timeline for ending America’s longest war once and for all. The next day, it was off to West Point to deliver “a major foreign policy address” at the commencement ceremony.

All these carefully orchestrated stops were contrived to reassure an increasingly doubtful domestic audience. The intended message: President Obama is still in charge, so you can stop worrying about what’s going on in the world and get back to watching “America’s Got Talent.”

Well, that was the plan. But only a White House indifferent to world affairs could hope that a series of speeches would erase concerns over setbacks in Libya, Syria, Iraq, and Ukraine, the inability to deal effectively with China’s increasingly aggressive territorial claims, or the resurgence of al-Qaida.

But even the “perfect” plan didn’t go all that well. The White House fumbled on the very first play, inadvertently “outing” the CIA station chief in Afghanistan. The subsequent attempt to recover—announcing that the administration would investigate itself to see how this embarrassment could have happened—was itself embarrassing.

NBC didn’t help either. In the middle of the president’s “everything is fine with foreign policy” campaign, it decided to air an exclusive interview with Edward Snowden, the government contract employee who walked out the door with some of the intelligence community’s biggest secrets.

The president’s “all is well” initiative will likely fade from the public consciousness, but the distractions should not be forgotten. They reveal a quiet crisis in Washington: the state of U.S. strategic intelligence.

For years, word has circulated in Washington that the president frequently refuses to take intelligence briefings or chooses to ignore the advice offered in those meetings by intelligence officers.

Throughout the debacle of the Snowden revelations, the administration has chased itself in circles in trying to respond. This has accomplished little other than to make themselves appear inept.

In April, the top two officials at the Defense Intelligence Agency announced they were throwing in the towel and calling it quits.

As Russian tanks rolled into Crimea, the administration sheepishly admitted it had no strategic warning of what Putin was up to.

Crises in strategic intelligence usually bubble on the backburner until they burst.

The latest pratfalls from the White House, culminating in betraying our own spymaster in Afghanistan, ought to have all of Washington wondering just how the heck this administration is managing the U.S. intelligence community.

In 2004, Congress passed the Intelligence Reform and Terrorism Prevention Act. That law introduced the most sweeping reforms in the community since the National Security Act of 1947. What happened? Did the law deliver real reforms or just create more bureaucracy? What kind of stewardship has Obama delivered over the course of two presidential terms?

In an increasingly unsettled world, where the president wants a smaller military and a more reticent foreign policy, does having less awareness of what is going on abroad make sense?