You Won’t Believe Who America’s Greatest Enemy Is 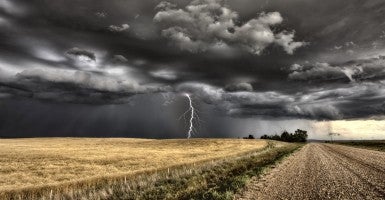 President Obama’s West Point speech proved telling in ways he probably didn’t plan. The commander-in-chief tried to use the commencement address to quell concerns over a foreign policy that has produced nothing but controversy and setbacks since the debacle in Benghazi.

But the president scored more misses than hits with the audience, pundits and the press. Even The Washington Post acknowledged that the speech did little more than mow down a field of “straw men.”

As far as policy goes, the speech may have been a clarion call for little more than muddling through. But for prospectors of presidential rhetoric, it is a gold mine. And the biggest nugget is the paradox of an administration mimicking the caricature of the foreign policy it created to discredit the previous administration.

Every administration must define the enemy from which they are protecting us. During the Cold War, that was easy. But since the fall of the Berlin Wall, it’s often been less self-evident.

That can be problematic. Strategy, after all, is a competitive practice: the art of besting somebody—the Trojans, the Red Coats, the Nazis, whoever’s on the other end of the spear, the sword or the gun. “It is about getting more out of a situation than the starting balance of power would suggest,” Lawrence Freedman declares in his new book, Strategy: A History. “It is the art of creating power.”

And then, slapping the other side over the head with it.

During the Cold War, the enemy was in Moscow. The big challenge was to make neither too much, nor too little of the threat. George Kennan always argued for a tempered, measured threat assessment. On the other hand, the drafters of NSC 68, led by Paul Nitze, and Senator Arthur Vandenberg wanted to “scare the hell out of the American people.”

Getting the threat right was critical. It was the main selling point to the public about how much was enough to defend us.

But America’s long-time selling point for strategy crumbled with the Wall. No self-evident replacement arose until 9/11. From the rubble of the World Trade Center, a strategy for fighting a “global war on terrorism” (GWOT)—the “Long War”—emerged.

Then came Obama. He not only shortened the long war and banned GWOT from the rhetorical locker room, he actively participated in a campaign to delegitimize the whole endeavor. That crusade continued into the West Point speech. “[A] strategy that involves invading every country that harbors terrorist networks is naive and unsustainable,” the president told the Corps of Cadets and their assembled loved ones.

Of course, the Bush administration had made exactly the same point again and again, post 9/11. Bush, for example, passed on taking on a number of transnational terrorist groups including Hamas, Hezbollah, all sorts of Pakistani groups with lots of initials and most of the nascent groups in North Africa.

Bush invaded exactly two places—Iraq and Afghanistan. Obama invaded one—Libya, and he tried to bomb his way into another war—Syria. So, at least numerically speaking, the score on invasions is pretty even. Obama’s critique of GWOT is an embarrassment of oversimplification.

But while treating the terrorist threat dismissively, Mr. Obama went on to identify an alternative “enemy” on which to pin a grand strategy. Unfortunately, his chosen enemy is just as far removed from a pressing threat to national security as his caricature of the Bush Doctrine was divorced from the real Bush Doctrine.

The “enemy” chosen by Obama to animate America’s grand strategy is climate change. The nation’s existential goal, therefor, is “to energize the global effort to combat climate change, a creeping national security crisis that will help shape your time in uniform,” the commander-in-chief told his new troops at West Point. Apparently, the new second lieutenants will spend their careers fighting the weather.

Weather may seem an odd foe for the military. But for a progressive president, it’s the perfect choice.

Weather isn’t a person or a country. He risks offending almost no one.

Unfortunately, as an organizing principle for national security, climate makes a terrible “enemy.” It is enormously complex and unpredictable. The unpredictability of how climate change will play out on the global stage ought to dissuade any strategist from regarding it as an organizing principle around which one can practice what Freedman calls “the art of creating power.” Basing strategy on climate would be the ultimate march of folly.

Mr. Obama may well know that. The reference to climate may be just like the rest of the address: knowingly empty rhetoric. But it does lead to a conclusion devoid of complexity and unpredictability—this speech and the vapid ideas in it will soon be forgotten.

Originally appeared in The National Interest.