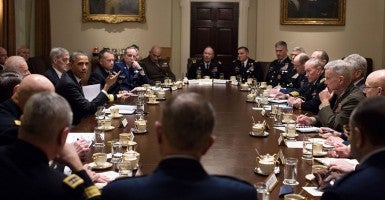 Many people think President Obama’s speech at West Point was all about politics. Setting up straw men and knocking them down, the president defined himself mainly by what he wasn’t. He was not an isolationist. He was not a warmonger. Of course, no one seriously claimed he was either one. Nor are these extremes real-world strategic options.

Yes, the president’s speech was offered as a defense against his political critics. But it would be wrong to conclude that politics is the only factor driving Obama’s foreign policy. There appears to be a strategic purpose as well: Put simply, it is to limit American power and to redefine the very nature of American leadership in the world.

Prior to Obama, presidents tended to see American power as a good thing. It helped secure the peace and provide world order. It served the values of freedom and democracy by supporting allies. Whatever American presidents of the post-World War II era may have thought about particular wars, they did not doubt the goodness and necessity of American military power—both as a means of defense and as exerting a deterrent and stabilizing force for the world as a whole.

Obama sees it otherwise. At West Point he was careful to give a nod to the traditional view that military power is the “backbone” of American leadership. But as with almost all statements about America’s role in the world, he had reservations, particularly with respect to things military. “Military action cannot be the only—or even primary—component of our leadership in every instance,” he said. “Just because we have the best hammer does not mean that every problem is a nail.”

The sarcasm is revealing. So, too, is the proliferation of “ifs”, “ands” and “buts” to qualify (and contradict) every hard statement about the efficacy of American power. The president clearly thinks that American military power is overrated, if not downright problematic. What is particularly odd is his apparent belief that it has no real value unless it is actually used. For example, at West Point he proclaimed that the armed forces’ main job is to defend what he calls “core interests — when our people are threatened; when our livelihoods are at stake; when the security of our allies is in danger.” If military forces are to be used for any other purpose, for humanitarian causes, for example, it must be done so “multilaterally,” either through the United Nations or cooperation with some undefined “others.”

It’s important to be clear what he’s talking about here. Obama is describing the active use of force. There is no consideration of the residual value of military power—and thus of the armed services themselves—as a deterrent to war, which after all was the central military strategy not only throughout the Cold War but even in the decades thereafter.

Obama’s distrust of American power is not mere rhetoric. He is putting his money where his mouth is. He’s making deep cuts to America’s armed forces. The one announcement of increased investment in security in the West Point speech was to spend $5 billion—not to modernize America’s armed forces, but to aid other countries in combating terrorism. His entire strategic push is to get others—the U.N., our allies—to do more so we can do less. That’s true not only when he implores our NATO allies to “pull their weight,” but when he expects the Afghan government to take our place in combating the Taliban after our withdrawal.

Preaching to others to do what we are ourselves unwilling to do is not leadership. It is an abdication of leadership. Our indispensable role has always been to do what others cannot do, and at the top of that list was to provide enough credible military strength to maintain a balance of power in favor of us and our allies.

It’s a shame the president has such doubts about the country he leads.