Is the Gold Standard Making a Comeback? 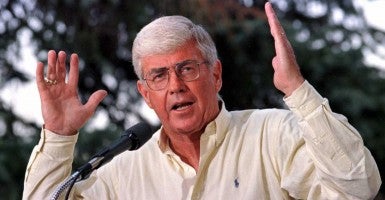 Yesterday was the 30th anniversary of Republican Rep. Jack Kemp’s introduction of the Gold Standard Act of 1984—a bill that some regard as the last congressional push for sound money.

“Lower marginal tax rates and a proxy for the gold standard created 40 million jobs,” Jack Kemp Foundation President Jimmy Kemp said at a forum hosted in the U.S. Capitol. “We are here today to encourage people to take it and bring it to conclusion.”

The Jack Kemp Foundation, in association with American Principles in Action, hosted the event Friday to discuss Kemp’s gold standard legacy and to encourage a solution to Kemp’s “unfinished business” of supply-side economics. Kemp, who represented New York in Congress and ran for vice president, died in 2009.

The speakers of the forum included Dave Hoppe, Kemp’s chief-of-staff; John Mueller, the staff economist to Kemp; Ralph Benko, founder of the Prosperity Caucus; and Jeffrey Bell, the national co-chairman of Kemp for President as well as the Republican candidate for the New Jersey Senate race whose platform rests heavily on the gold standard.

The Heritage Foundation’s Norbert Michel attributed the Federal Reserve’s recent “aggressiveness” as a key reason for the resurfacing of the gold standard discussion.

Hoppe pointed to the Federal Reserve as the “lead control” of the dollar, claiming that because it is a reserve currency the government has the right to spend while rarely having to “balance [its] books.”

“The dollar can be backed by other things,” Hoppe said. “The question is whether you think [Federal Reserve chairwoman] Janet Yellen is all you need behind the money of the United States [rather] than having a stable monetary policy based on backing your money by something else. In this case we suggest gold.”

Mueller pointed to Bell’s “surprising” victory in the New Jersey primary election as an indication that the gold standard is still relevant today.

“I don’t think that the gold standard is unpopular or hard to understand by typical Americans,” Bell said. “What is hard for them to understand is what has been happening to the economy.”

Bell described his campaign as an experiment to test this theory, stating that his lack of money forced him to concentrate his resources toward his gold standard platform. He campaigned on the idea that the Federal Reserve’s zero interest rates are the “cause of all these [economic] problems” and that the U.S. is in a situation where going back to a gold-backed dollar makes sense.

“That’s the only message we had,” Bell said. “If I had lost, then it’s self-evident that the experiment would be over and it wasn’t working. But if I won there could only be one reason. Not that I had name recognition … but only because typical voters as opposed to elites do find this matter understandable.”

Hoppe and Bell acknowledged that the gold standard is not a popular idea, particularly among politicians and intellectuals.

“The only way to popularize it is with popular votes,” Bell said. “When political and financial and economic elites won’t even have a debate on something then there’s only one recourse, which is to go directly to the voters.”

Voters, after all, make up their minds on what they experience, not just what the Fed tells them about the economy.