How a Dad’s Involvement Can Change His Children’s Future 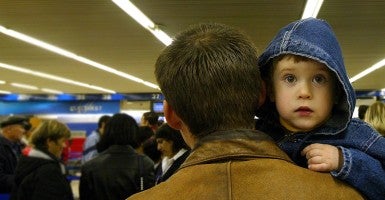 Children with involved fathers are more likely to graduate from college—particularly among middle- and upper-income families but also among those from lower-income backgrounds, a recent study found.

According to this new research by Brad Wilcox at the University of Virginia, the family structure that best promotes this involvement is a married, intact family. This is the case for youth from lower-educated homes as well as those from more highly educated homes.

On the other hand, their peers from college-educated homes are “triply advantaged,” according to Wilcox: “They typically enjoy more economic resources, an intact family, and an involved father.”

The question then is, how to keep youth connected with their fathers, or, as Wilcox puts it, how to “bridge the fatherhood divide between children from college-educated and less-educated families.”

Increasing the odds that more children are raised in homes with their married mother and father is a crucial factor in the equation.

Today, more than  40 percent of children are born to unwed mothers. Among lower- and moderately educated (high school diploma or less) households, the number is much higher. Taking this factor into account along with the high rate of divorce, 55 percent of children are expected to spend some time outside of an intact-parent family before they reach their 18th birthday.

Despite the trends, accepting the decline of marriage is not the answer. Marriage is critical to helping children succeed, as Wilcox’s research and a multitude of other studies attest. Marriage is the foundation of a strong society, helping men, women and children thrive.

Some communities are taking action. In his recent book, Brigham Young University professor Alan Hawkins describes a plan for helping individuals and couples build and maintain lasting, healthy marriages. As I wrote last month in Public Discourse, Hawkins makes the case that preparing for and maintaining a healthy marriage is a lifelong endeavor. His strategy includes relationship and marriage education throughout different stages of life: from helping youth in high school learn how to build healthy relationships that will prepare them for marriage down the road, to helping couples in crisis salvage their marriage if possible.

Hawkins points to examples of schools, communities and states that have taken important steps to providing opportunities to build and strengthen marriages.

For example, he points to high schools in Alabama that have taught “relationship literacy education” classes. Students who participated in these classes had more realistic attitudes about marriage and better conflict-management skills a year after participating, compared to their peers who didn’t participate. More than half of the students came from low-income households.

Additionally, First Things First in Chattanooga, Tenn., runs a “community healthy marriage initiative.” First Things First provides marriage education courses, operates public advertising campaigns about the importance of marriage and sponsors events for couples and families. They report that their efforts have reduced divorce rates in their community by nearly 30 percent (although a more rigorous evaluation is needed).

Finally, Utah and Oklahoma have taken the lead on marriage initiatives by providing marriage and relationship education to couples.

A restoration of marriage in the United States will ensure more children have the opportunity to thrive, not only academically but when it comes to their physical and emotional health, as well as their own relationship success. Ultimately, it will mean providing a culture that gives Americans the greatest likelihood to succeed in achieving their dreams.