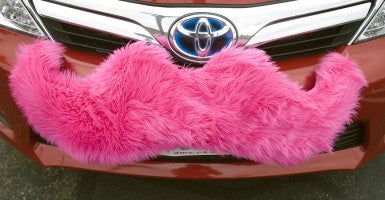 Lyft, a car service allows users to request a ride by using an app, requires it's cars to have a pink mustache on the front. (Photo: Newscom)

Just when you thought you couldn’t despise the Department of Motor Vehicles any more, Virginia’s DMV decided to wage war against popular passenger carrier companies Uber and Lyft, sending cease and desist letters urging them to stop doing business in the commonwealth.

The Virginia DMV, which has already fined Uber and Lyft $26,000 and $9,000, respectively, says Virginia law “requires for-hire passenger carriers to have proper operating authority,” and their business model—a model which allows passengers to conveniently look up driver ratings and connect with one such part-time driver of their choice via smart phone mobile apps—doesn’t fit the bill.

>>> Check Out: Seattle’s Rideshare Caps Will Squash Innovators Such as Uber

Since the state is currently reviewing its passenger carrier laws, DMV Commissioner Robert Holcomb told Uber and Lyft they should “focus [their] resources on participation in this study rather than continue illegal operations in the meantime,” according to the letters.

Virginia’s move to immobilize Uber and Lyft puts it on par with cities like Los Angeles and San Francisco, where taxicab companies have wielded their influence to try to halt competition.

“This is just the latest example of legislation getting in the way of entrepreneurship and innovation,” said Matthew Feeney, policy analyst with the Cato Institute. “If lawmakers in Virginia want Virginia to be an economically profitable and prosperous state, then they should welcome companies like Uber and Lyft, and not dissuade them from coming into Virginia.”

Sunni Blevins Brown, spokeswoman for the Virginia DMV, confirmed that a “number of transportation companies, including taxis, have contacted DMV regarding this matter.”

And that, said Christopher Koopman, program manager for the Mercatus Center’s Project for the Study of American Capitalism at George Mason University, drives home the problem. No pun intended.

“These sorts of actions, they privilege existing firms and they stifle innovation and they limit consumer choice,” Koopman said. “In situations like this, regulations are being used to block the development of promising situations, products such as Uber that are market responsive, in a lot of ways, to issues that consumers have faced in the past. In a lot of ways firms like this pop up to respond to needs of consumers, and regulations act as barriers to entry. They make it more difficult and they make it more expensive for the entrepreneur or the innovator to provide higher quality services at a lower cost to consumers.”

The Virginia DMV, however, has gone even further.

According to the Virginian-Pilot, it’s circulating a notice that warns the public to research any ride service before using it and points riders to a website listing companies that have the DMV’s trusted stamp of approval. Uber and Lyft didn’t make the cut.

The DMV insists it’s looking out for the best interest and safety of consumers.

The free market, however, works out many of those safety concerns all on its own, said Feeney and Koopman.

“I think the technology that allows Uber and Lyft to work actually helps customers when it comes to things like safety,” Feeney said. “For example, Uber allows not only for the customers to rate drivers, but it also allows drivers to rate customers, which makes it safer for drivers and better for customers.”

Plus, Uber and Lyft perform background checks on their drivers, Feeney said.

Since companies like Uber rely on a ratings system, bad drivers are naturally weeded out and good drivers are rewarded with business, allowing consumers to make informed choices, Koopman said.

“When you get a cab, you don’t know what the record of the driver is like,” Koopman said. “You don’t know, is it going to be a good or a bad experience? But an innovation like Uber allows the consumer to know at least to a certain degree the type of driver they’re going to be dealing with.”

“The DMV’s actions today are shocking and unexpected. Uber has been providing Virginians with safe, affordable and reliable transportation options for months and has continued to work in good faith with the DMV to create a regulatory framework for ridesharing,” a statement from the company reads. “The DMV decision today hurts thousands of small business entrepreneurs who rely on the Uber platform to make a living, create new jobs and contribute to the economy — and it hurts the countless residents who rely on Uber to connect them with affordable, safe and reliable transportation alternatives. We look forward to continuing to work with the Virginia DMV to find a permanent home for ridesharing in the commonwealth.”