Why Reagan Lives on 10 Years After Death 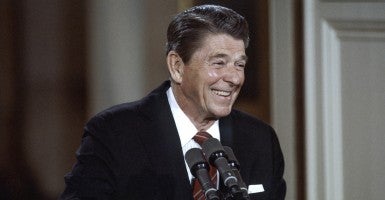 On June 5, 2004, President Ronald Reagan died after battling Alzheimer’s disease. Ten years later, his legacy lives on through the conservative principles he espoused. When he was shot on Mar. 30, 1981, and the bullet stopped one inch from his heart, Reagan spent much of his time in recovery assuring everyone that he was just fine. Even liberal commentators applauded his courage:

“Everybody knows,” wrote James Reston of The New York Times, “that people seldom act in the margin between life and death with such light-hearted valor as they do in the movies. Yet Ronald Reagan did.” Reagan relied upon his “70 percent rule” — he knew when to bend a little and when to stand firm.

“Die-hard conservatives thought that if I couldn’t get everything I asked for, I should jump off the cliff with the flag flying-go down in flames. No, if I can get 70 or 80 percent of what it is I’m trying to get … I’ll take that and then continue to try to get the rest in the future.” — Ronald Reagan Reagan stood firm in protecting the rights of every American—from the moment of conception to that of natural death.

“For him the sanctity of life was not a slogan but a fundamental principle to be honored,” Edwards said. He was the first sitting president to write a book while in office when he wrote “Abortion and the Conscience of the Nation” in 1983. “I’ve noticed that everyone who is for abortion has already been born.” – Ronald Reagan In late 1981 and all of 1982, when Reagan’s tax cuts had not yet kicked in and the U.S. economy still lagged, people, including his staff, were worried. But he had faith in the American people:

“[If they] could be liberated from the restraints imposed on them by government, they’d pull the country out of its tailspin.” – Ronald Reagan

At the end 1982, America began the longest peacetime economic expansion in U.S. history up to that time, creating 17 million new jobs during the Reagan years.