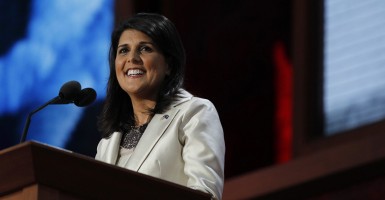 Common Core is on the chopping block.  Oklahoma today became the third state to exit the national education standards and reclaim its decision-making authority in education. The move comes on the heels of South Carolina, which days ago put an end to Common Core—setting precedent for other states to follow.

South Carolina Gov. Nikki Haley quietly signed a bill withdrawing the state from Common Core, but Oklahoma Gov. Mary Fallin, also a Republican, was not shy about stating her reasons for pulling her state from the national standards.

“We are capable of developing our own Oklahoma academic standards that will be better than Common Core,” Fallin said in a statement released by her office. “Unfortunately, federal overreach has tainted Common Core. President Obama and Washington bureaucrats have usurped Common Core in an attempt to influence state education standards.

“The results are predictable,” Fallin added. “What should have been a bipartisan policy is now widely regarded as the president’s plan to establish federal control of curricula, testing and teaching strategies.”

Oklahoma will return to the Priority Academic Student Skills standards, which were in place before Common Core practices were implemented. New standards will be developed by the state’s Board of Education, Regents for Higher Education, Board of Career and Technology Education and Commerce Department.

“As the third state to exit Common Core, Oklahoma has now sent a clear signal that states are eager to reclaim control over the content taught in local schools,” Corona said.

But  Michael Petrilli, a spokesman for  the Thomas B. Fordham Institute, a major advocate of Common Core, didn’t see it that way.

“It’s deeply disappointing that politics have triumphed over what’s best for kids in Oklahoma and South Carolina,” Petrilli told The Daily Signal. “Their education systems will now be thrust into years of chaos, time that would be better spent on teaching and learning. Then again, Oklahoma’s and South Carolina’s leaders have every right to make this decision, ill-advised as it is.”

In South Carolina, Haley signed legislation Friday requiring a committee to review and implement a new set of academic standards by the 2015-16 school year. The bill also mandates that schools revert back to the state’s former assessment tests by 2014-15. Until then, Common Core will remain in effect.

“Just as Indiana did in March, South Carolina’s actions—exiting the Common Core and reclaiming control of their educational decision-making authority—have paved a path for other states struggling with the one-size-fits-all national standards to follow,” Corona said.

A total of 17 states have pushed back against Common Core–including Alaska, Nebraska, Texas, and Virginia, which declined to sign on rom the beginning. In Missouri, a bill to exit Common Core currently sits on the governor’s desk for approval.

Update: This report was updated to reflect comments from the Fordham Institute.