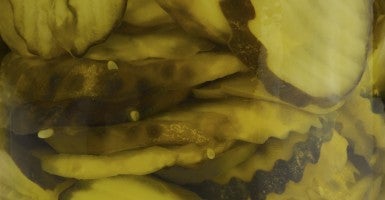 Officials of the Export-Import Bank have gotten themselves into quite a pickle. The “small business” they continuously showcase as proof of their success actually has a different history than the promotional version.

In a variety of videos, press releases, news accounts and blogs, bank Chairman and President Phil Hochberg extols Ex-Im for transforming Miss Jenny’s Pickles from a small town startup to an international brand. As he said in his remarks to the bank’s 2013 annual convention: “Their story is what Ex-Im is all about.”

It also is a pivotal feature of officials’ pitch to Congress in seeking reauthorization of Ex-Im before the charter expires on Sept. 30. The bank doles out taxpayer-subsidized financing to overseas businesses for the purchase of U.S. products. But the vast majority of subsidies benefit major corporations, making Ex-Im a fount of cronyism.

Peddling Miss Jenny’s story helps bank officials portray Ex-Im as a champion of the little guy (er, gal). The same strategy is evident in their penchant for declaring that small businesses make up 80 percent of Ex-Im transactions. Although most of the applications to the bank originate from smaller firms, such firms receive less than 20 percent of the financing.

Hochberg often regales audiences with the story of how business owner Jenny Fulton was so inspired by a 2011 presentation he gave in Charlotte, N.C., that she ran to her car to retrieve a jar of pickles, thrust it into the hands of Hochberg’s driver and instructed him make sure the bank president sampled some. So impressed was he with the product, evidently, that Ex-Im financing soon followed, and Miss Jenny’s Pickles became a global sensation.

At least that’s the government’s version.

But Miss Jenny’s export breakthrough actually occurred as a result of the labors and tenacity of Fulton and co-owner Ashlee Furr. Years before they received any assistance from Ex-Im, the women managed to garner shelf space in more than 600 U.S. stores, including Harris-Teeter, Whole Foods, Dean & DeLuca and Williams Sonoma. Even QVC was selling their “Frickle Spears” (fried pickles) at four pounds for $44.86, shipping and handling included. That’s hardly the distribution of a startup.

Even more important, Fulton and Furr began exporting Miss Jenny’s Pickles to China in 2011, two years before the involvement of Ex-Im. Their distributor already had stocked the product in 40 Chinese stores. They also had plans in place to expand to Mongolia and Canada. In fact, it wasn’t until 2013 that the company received credit insurance of $200,000 from Ex-Im, followed by identical coverage for fiscal year 2014.

Fulton does credit the bank with helping to expand exports of her product. “Without the Ex-Im Bank,” she said, “we would not be able to export as efficiently or as often.” But would private investors reject a business with a proven record of export success?

Even so, it’s hardly the responsibility of taxpayers to make Miss Jenny’s Pickles a more efficient exporter.

Bank officials make plenty of claims about the necessity of Ex-Im subsidies, including the need to fill “gaps” in export financing and “sustaining” U.S. jobs. But 98 percent of all U.S. exports do not receive assistance from the bank, and Ex-Im financing actually puts some U.S. workers at a disadvantage by providing overseas companies with billions of dollars in financing at favorable rates.

The bank’s tale about Miss Jenny’s Pickles makes for heart-tugging promotion. But Fulton and Furr, not Ex-Im, are the real architects of their success. Ironically, they started the company after being laid off in the wake of the financial crisis—a crisis spurred by the distorted credit subsidies of other government-sponsored enterprises. Allowing the bank charter to expire should be an easy call for any lawmaker who can distinguish between propaganda and fact.