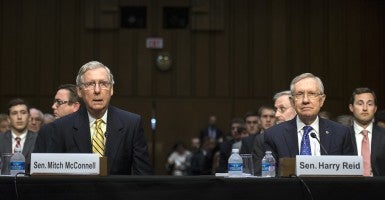 The largest hearing room the Senate has in the Hart Building was standing-room only on Tuesday when the Senate Judiciary Committee held its hearing on the resolution proposed by Sen. Tom Udall (D-N.M.) that would amend the First Amendment and give Congress unlimited, plenary power to restrict political speech and political activity.

In a historic and unprecedented event, both majority leader Harry Reid (D-Nev.) and minority leader Mitch McConnell (R-Ky.) appeared as the first two witnesses.  They had starkly different presentations, with Reid complaining about so-called “dark money” and corporations and special interests “meddling” in congressional races.  He clearly doesn’t like the fact that Americans have the ability to criticize him and his policies.

McConnell went back to first principles, talking about the First Amendment and the fundamental importance of protecting political speech, as did Floyd Abrams, the well-known First Amendment lawyer who won the historic New York Times Co. v. Sullivan case.  As Abrams said, the purpose of this proposed amendment is clearly “limiting speech intended to affect elections.”  He observed that the title of the amendment, “Restore Democracy to the American People,” is based on the false notion that our democracy has already been lost.  According to Abrams, “the notion that democracy would be advanced – saved, ‘restored’ – by limiting speech is nothing but a perversion of the English language.”

The Democratic witnesses in favor of the amendment seemed obsessed with the Koch brothers, including a state senator from North Carolina who made bizarre claims about supposed Koch-financed efforts to implement a voter ID law to “suppress” the votes of racial minorities.

It was almost funny – Democrats can’t even hold a hearing about the First Amendment without working in their talking points about voter ID and “vote suppression.”  All of the Republican senators who spoke, including Sens. Charles Grassley (R-Iowa) and Ted Cruz (R-Tex.), made stirring statement about the importance of preserving the Bill of Rights.  I won’t summarize their statements but they are worth watching (here and here).

What was most interesting was something that happened before the hearing started that shows just how dangerous it would be to give Congress the power Udall, Reid and 39 other Democratic senators are seeking (there are 41 cosponsors of this resolution) and how they don’t believe the rules should apply to them.  I was standing in line outside the hearing room waiting to get in and get a seat.  There was a sign prominently taped to the wall where we were all standing that warned attendees of all of the things not allowed in the hearing room, like standing, shouting, applauding, and most importantly, “no signs.” I was at the head of the line when a large cart loaded with boxes came down the hallway, accompanied by six or seven individuals, many holding protest signs like “Restore the First Amendment – Get Oil Money out of Elections” and “Big $$ out of Politics.”  The boxes had prominently pasted on their side the names of liberal advocacy groups and PACs including People for the American Way, the Daily Kos, Public Citizen, Wolf PAC, Moveon.org, the Coffee Party, and Common Cause.  The boxes were apparently full of petitions supporting Udall’s censorship amendment.  As the cart headed into the hearing room with the protest signs held high, I reminded the Democratic committee staffer supervising entry that these individuals were violating the posted rules about no signs and no protests.  She just ignored me and looked away.

About thirty photographers and reporters facing the entry started snapping pictures of the advocacy group representatives the moment they came in as the cart was trundled up to the front of the hearing room.  Several of the advocacy representatives went to sit down, but not before standing up with their signs held high and posing for more photos from the media.

I have no doubt that if I had attempted to walk into the hearing room with signs protesting this amendment, as opposed to supporting it, I would have been stopped by the committee staffer, and if I had persisted, she would have called over the Capitol policeman who was also standing at the entrance studiously not seeing the liberal protestors violating the posted rules.

It is true that Chairman Patrick Leahy (D-Vt.) warned the attendees after the hearing started about no sign waiving or protests and one individual was eventually ejected; however, Leahy only did that after the cameras were turned on for anyone watching the hearing on the committee website.  It was his committee staff who, after all, allowed their supporters to come in early with their protest signs and helped to stage-manage protests prior to the start of the hearing for the benefit of the photographers in the hearing room.  You can see one of those photos here – notice there are no staffers or Capitol Police hurrying over to eject the CodePink demonstrators from the hearing room.

So it seems that some Democratic senators want to amend the Constitution so that the American people give them the power to set the rules for raising and spending money on political campaigns and independent expenditures that speak in support of, or opposition to, candidates.  However, at the very hearing at which this amendment was introduced, some of these senators were prepared to apply the Senate’s own rules to only one side of the debate.  Not something that inspires confidence that any such rules on political activity and political speech would ever be enforced in a nonpartisan, unbiased, and objective manner.

Hans A. von Spakovsky is a Senior Legal Fellow at The Heritage Foundation.  Along with John Fund, he is the coauthor of “Who’s Counting? How Fraudsters and Bureaucrats Put Your Vote at Risk” (Encounter 2012) and the upcoming “Obama’s Enforcer: Eric Holder’s Justice Department” (HarperCollins/Broadside June 2014).