Why Hollywood Hasn’t Made a Tiananmen Movie 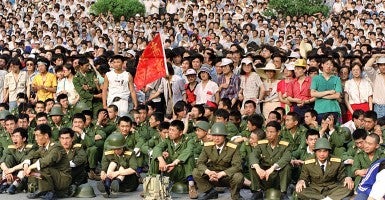 This file photo taken on June 3, 1989 shows soldiers of the People's Liberation Army (PLA) sitting in front of the Great Hall of the People at Tiananmen Square in Beijing. (Photo: CATHERINE HENRIETTE/AFP/Getty Images)

A quarter-century ago today, thousands of people were massacred in and around Beijing’s main square, Tiananmen. If you’re a millennial born just before or after the massacre, you likely know little or nothing about this tragedy.

I was a 27-year-old journalist in Hong Kong back then, having just arrived a few months earlier. Though as a journalist I wasn’t supposed to take sides, I marched with tens of thousands of Hong Kongers in the lead up to the Tiananmen massacre, as students in Beijing began to gather on the square following the death on April 15, 1989, of the purged reformist party secretary Hu Yaobang. I told myself I was “covering” the protests, but as someone who had been born in Cuba, I instinctively sided with the demonstrators who wanted to end the Communist Party’s authoritarian rule.

In the first days of June, Deng Xiaoping, then head of China, decided the demonstrators were threatening the rule of the Communist Party. Deng sided with the hardline Prime Minister Li Peng, who together with Deng ordered soldiers in tanks to massacre the students at Tiananmen.

I’ll never forget what happened that day, one of the saddest days of my life. My girlfriend and I started getting phone calls as soon as the tanks began rolling in China. We never slept that night and followed the event glued to the TV, weeping as we witnessed this horrific historical incident occur.

Yet, although Hollywood has drawn attention to scores of similar historical tragedies over the years, Tinseltown has consistently averted its gaze from Tiananmen, helping that horrifying day fade from our culture’s consciousness.

Last night I talked to my friend Rose Tang, one of the last students to leave the square that fateful night—which she did after climbing over a tank. Tang, now a writer in New York, also was perplexed about Hollywood’s silence. “Yeah, why?” she asked. “There are a lot of great stories to tell, and it would be very dramatic. They could recreate Tiananmen in any Hollywood studio.”

Make no mistake: There is a story to tell. Students mourned Hu Yaobang’s death because Hu had proved himself to be serious about reform – which was precisely why he was purged by the Communist Party’s ruling body. As Chinese students watched European countries rebel against their communist dictators, they were inspired. That, combined with their fond memories of Hu, created a strong longing for political emancipation. In the weeks that followed Hu’s death, students turned their mourning into a full-fledged pro-democracy protest. By May 1989, Tiananmen and adjacent parts of Beijing were filled with hundreds of thousands of demonstrators, and there were protests in 400 Chinese cities. And then, of course, there was the terrible ending: the massacre itself.

It’s not surprising China wants everybody to forget Tiananmen – and Hollywood may be influenced by that. After all, Hollywood receives significant funding from China. One of my friends in Hollywood, Ben Shapiro, told me yesterday that “everyone is scared of the Chinese market being closed to particular films or studios.” Indeed, in 2012 Chinese audiences shelled out $2.7 billion in box office sales for “Meiguo Da pian”—big American movies –and studios from Disney to Fox co-produce movies with China. DreamWorks has even struck a deal with two government-owned Chinese companies to create “Oriental DreamWorks.” One Chinese media fund alone—the Harvest Seven Stars Media Private Equity—has about $1 billion to invest in Hollywood.

Is there self-censorship? DreamWorks CEO Jeffrey Katzenberg said in a speech in China last year that “of more than a dozen movies that we have brought here … we’ve actually never been asked to change a single frame of a single film.” Because of this, Katzenberg concluded that “there is an underlying compatibility between the stories we like to tell, the way in which we like to tell them, and the moviegoing audience here in China.”

Hollywood types also may not be interested in telling a story about people standing up to Communism. It’s, after all, a town run by progressives with a strange weakness for communist dictators. Oliver Stone and Sean Penn, who adored Venezuela’s Mao-wannabe Hugo Chavez, are unlikely to make a movie about a protest where the protagonist erected a likeness of the U.S. Statue of Liberty.

China also has been able to buy a good chunk of academia, showering millions on some 450 Confucius Institutes installed at U.S. schools and universities. These centers, which aid in the teaching of the Chinese language and culture, are run by people who work at the Chinese Embassy or different consulates across the U.S., who themselves report back to Beijing. They are known to mix Communist Party propaganda with the lessons and to bully dissenting teachers.

As a result, today is one of the most important historic dates you may know nothing about – and may well never see featured in a movie theater near you.