The Photos China Doesn’t Want You to See 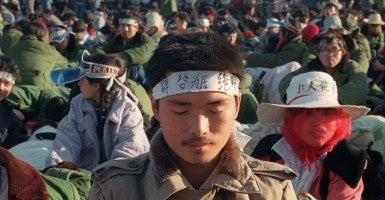 Thousands of people were massacred in and around Beijing’s main square, Tiananmen, 25 years ago today. Student-lead, unlimited hunger strikes were part of mass pro-democracy protests against the Chinese government in Beijing. Since the bloody event, China has attempted to erase any reference to the Tiananmen crackdown from books, television and the Internet, to rid it from public discussion. Students from Beijing University gathered for an unlimited hunger strike as part of mass pro-democracy protests against the Chinese government in Beijing. (Photo: Newscom) Students forced soldiers of the People’s Liberation Army (PLA) sit in front of the Great Hall of the People at Tiananmen Square on June 3, 1989. (Photo: Newscom) Chinese workers filling the streets of Beijing to support the students’ pro-democracy movement and their hunger strike. (Photo: Newscom) The protests widened in China’s capital but were eventually violently beaten down. (Photo: The Economist via Twitter) A famous photo of a Chinese man, later known as “Tank Man,” who stands alone against military tanks. (Photo: History Pics via Twitter) Participants hold candles during a vigil to commemorate the 25th anniversary of the Tienanmen Square crackdown in Hong Kong on June 4, 2014. Hong Kong is the only place on Chinese soil where large-scale events commemorate the tragic day. (Photo: Newscom) A candlelight vigil in Hong Kong to commemorate the 25th anniversary. (Photo: Newscom)