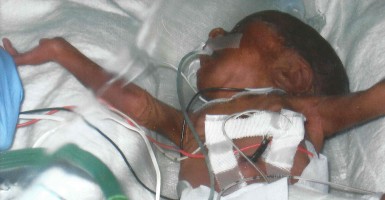 Dreshan shortly after birth: 'Why would I make his chances of surviving more slim?' his mom asks. (Photo: Sharrissa Cook)

Just 25 weeks into her pregnancy, Sharrissa Cook gave birth to a critically ill baby boy. Dreshan weighed in at a fragile 1 pound, 11 ounces. He lay motionless in the incubator, connected to tubes and monitors in the neonatal intensive care unit at the University of Alabama at Birmingham Hospital.

It was Oct. 11, 2006. Medical personnel asked Cook, then a 26-year-old single mother, to enroll little Dreshan in a study. She says they described it as a program offering assistance and encouragement to preemies—premature babies—and their families. She readily signed the consent form.

“I remember them telling me they were a support group who would pretty much hold my hand through the developmental process,” Cook says.

But in reality, the study was much more than that. It was a national, government-funded experiment on 1,316 extremely premature infants in which their fate may as well have rested with the flip of a coin.

Other single moms who were among those persuaded to sign up their critically ill babies at the University of Alabama at Birmingham Hospital describe similar misunderstandings of the study’s purpose.

Bernita Lewis, then a 22-year-old student, says she enrolled her premature newborn, Christian, after medical personnel told her it simply was to gather data such as weight and height.

And Survonda Banks, then 21, unemployed and on public assistance, says someone handed her the consent form on her way in for an emergency C-section at 28 weeks of pregnancy. Banks remembers being told only that it was a way to help her baby, Destiny.

The government-backed study is called SUPPORT, which stands for “Surfactant, Positive Airway Pressure, and Pulse Oximetry Randomized Trial.” The experiment was conducted at 23 academic institutions from 2005 through 2009 under the National Institutes of Health, part of the Department of Health and Human Services.

All three women now say they never would have agreed to take part if they had known the NIH-funded study’s true nature—to randomly manipulate preemie oxygen levels. They discovered that just last year.

Dreshan and Christian are now 7 years old and both struggle with myriad health problems. Destiny died within three weeks. The mothers wonder: Did the experiment contribute to any of the medical problems of their children?

“[Dreshan] was already at a slim chance of surviving; why would I make his chances of surviving more slim?” Cook asks.

Today, nine months after the federal government convened a public meeting to examine the subject, NIH and HHS officials have yet to propose a remedy to avoid a repeat of the controversy that erupted from the multiyear study.

“The word ‘unethical’ doesn’t even begin to describe the egregious and shocking deficiencies in the informed-consent process for this study,” says Dr. Michael Carome, an internationally recognized expert on research ethics with the Washington, D.C.-based consumer watchdog group Public Citizen.

“Parents of the infants who were enrolled in this study were misled about its purpose,” Carome says. “They were misled to believe everything being done was in the ‘standard of care’ and therefore posed no predictable risk to the babies.”

Although federal officials repeatedly said the government didn’t know how much the SUPPORT study cost taxpayers, a Freedom of Information Act request netted internal documents that show the figure is $20.8 million.

Dr. Waldemar Carlo, director of the neonatology division at the University of Alabama at Birmingham Hospital, lead site for the study, denies wrongdoing on behalf of the approximately two-dozen institutions that took part—including Wake Forest and Yale Universities.

In a letter to the New England Journal of Medicine in May 2013, Carlo (at right) wrote: “Our consent forms were conscientiously drafted according to the Code of Federal Regulations and were based on the best available evidence.”

Dr. Robert Califf, vice chancellor for clinical research at Duke University School of Medicine, which also took part in the experiment, urges observers to dial back the rhetoric. “Sensational claims of calling people unethical, I think, really detract from the serious discussion that needs to occur,” Califf (below right) says.

Doctors say babies are at risk of complications even when born at 37 weeks, now considered early term. The stated goal of SUPPORT was to identify the best oxygen level for extremely preterm infants—generally those born before 25 weeks, and so especially in distress.

Medical personnel routinely give supplemental oxygen to babies who are born with immature lungs. Too much oxygen can cause severe eye damage, including a blood vessel disease and blindness called retinopathy. Too little oxygen can lead to brain damage and death.

The NIH-funded experiment used the test babies in an attempt to find the sweet spot for preemies yet to be born: the lowest level of oxygen that would preserve vision, yet be sufficient to prevent brain damage and death.

To get the answer, researchers arbitrarily assigned infants to either a high-oxygen or low-oxygen group. Because, researchers say, all oxygen levels fell within the generally accepted range, they argue the babies received the same “standard of care” as babies not in the study. None of the consent forms mentioned a risk of death from the oxygen experiment.

But it turns out there were key differences in how researchers treated babies in the study compared with those not in the study.

Normally, medical personnel constantly adjust oxygen as preemies’ conditions change, based on their individual needs. But the SUPPORT study was designed to keep infants in their randomly assigned range, despite a baby’s individual needs.

And in a decision that one government source says shocked seasoned researchers when they learned of it, the babies’ oxygen monitors intentionally were altered to provide false readings. The reason: so medical staff wouldn’t be tempted to adjust oxygen out of the babies’ study-assigned range.

“Nothing in the consent form explained the falsely reading oxygen monitors could lead to adverse decisions about care of the babies,” Carome, who directs Public Citizen’s Health Research Group, says in an interview. He calls both the study design and consent form unethical.

In some instances, the results proved both disturbing and tragic.

More of the high-oxygen babies ended up with serious vision disorders. The low-oxygen preemies were more likely to die. The results, published in the New England Journal of Medicine in May 2010, sparked ethical questions and complaints. Companion studies being conducted in other countries were halted.

Of learning her baby had been part of an oxygen experiment, Sharrissa Cook says: “That’s more like playing Russian roulette to me. There’s no way I would say you could give my baby whatever you want him to have as opposed to what he needs.”

Four years after the SUPPORT study was published, it is the subject of heated scientific and ethical debates about the balance between the need to recruit human research subjects and the responsibility of researchers to fully disclose all risks to test subjects or their guardians.

Both sides agree the outcome stands to affect the way scientists conduct experiments on humans.

And now, Public Citizen and nine prominent scholars in bioethics, law, and history are calling on the HHS Office of Inspector General to step in. On May 20, they went public with charges that senior NIH and HHS officials engaged in serious misconduct by interfering with an ethics office in HHS as it investigates the experiment on preemies.

Rep. Rosa DeLauro, D-Conn., joined the call for the HHS inspector general to determine whether officials “compromised the integrity and independence” of the ethics probe.

“The most troubling part is that numerous high-ranking officials facilitated this interference by senior NIH officials,” Carome said, “despite the fact that NIH had obvious actual, direct conflicts of interest in the research under investigation.”

Next: Where do doctors, researchers, and government officials draw the line between the good of individual study babies and the greater collective good?