‘Nonsense’ Regulations a Problem Even in Business-Friendly Florida 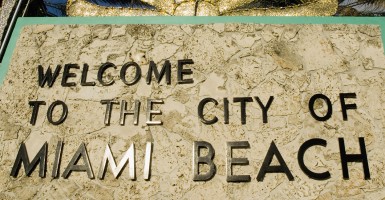 MIAMI—Florida owns a reputation as a pro-business state. Its state government attempts to streamline procedures and minimize the regulations that needlessly frustrate business owners and cost them time and money.

Its Republican governor, Rick Scott, signed a bill in 2012 that reduced the amount of time to approve certain permits—such as wetlands permits—from 90 days to 60, earning kudos from business groups. His administration also has scaled back education requirements and protectionist policies that kept newcomers out of professions such as hair stylists and real estate agents.

As a result, Florida also gets high marks in the “best places” surveys and recently came in second as the best place to open a business, according to Chief Executive’s 2014 Best & Worst States for Business.

Moreover, the article on the survey said Texas continues its 10-year hold on the position as best state overall, but Florida is “edging up and even overtaking Texas in its quality of living environment.”

Its local governments are another story.

“Inspectors are very abusive with us business owners,” he said recently. “They ask for nonsense things.”

Among other requests, he was ordered to replace metal drainage grates for ones made of concrete and add handicap parking—at a do-it-yourself car wash. New fire regulations required him and other building owners to install heavy metal boxes with keys stored inside to permit access in the case of an emergency.

The heavy metal box turned into the kind of nightmare that not only consumes excessive amounts of time and money but leaves business owners wondering why they bother at all.

It was one for the bureaucratic books.

“I called the number they gave me, but no one responded,” he said. “It took me time to get to the right person, but they really gave me the runaround. I went to the first floor, the second, the third, and came back to the first floor, and again to the third. And that [was] just to find the person who sells the lock box.”

But the box he bought didn’t come with a key, which started the game of runaround all over again. Again, he could not find the right bureaucrat. Finally, “I had to contact someone there who I knew to have someone else come by to open the box,” he said.

It didn’t even end there.

Abramovich had to fill out paperwork for a license to install the box. He sent in the paperwork only to have to do so again four days later because the procedures had changed.

“I paid $65 for the lockbox,” he said. “But I spent much more than that in time finding out how, when and where to buy it.”

In Naranja, where Abremovich owns a car wash, things aren’t much better.

He has a new ice machine, but it has sat idle for five months because he can’t get the local authorities to provide a water connection. In Homestead, where Abremovich has another car wash business, local authorities slapped his wrist for putting a poster in his shop window.

“An inspector came and notified me that I wasn’t allowed to have the sign,” he said. “If you look at the surrounding area you can see the amount of dirty businesses and overgrown lots, but they (inspectors) don’t go and check that out.”

Abramovich said navigating state regulations is a breeze compared to the local rules.

“The state level is more efficient,” he said. “If you call them they will respond, while municipalities and counties don’t.”

Julio Estremera, a board member of the Southwest Chamber of Commerce, says state and local officials largely work in tandem.

“State regulations are basically the same,” he said. “They [local government] could add on an extra tax or a restriction, but all the information is available online.”

Estremera said it’s important that business owners do their due diligence before opening a business or signing a rental agreement.

“When a person is emotionally involved in a business decision, it is difficult for them to listen to advice that could help them avoid getting scammed,” he said. “They are so focused on their dream, and in their mind they won’t fail. So they usually enter into a business without a business plan. That is the right formula to fail.”

Abramovich said he doesn’t think his “dream” is the problem. He said local authorities just complicate things with too many regulations.

“I don’t have any problem with following the rules, but they need to tell me how to do it. When I call, no one responds,” he said. “This [opening a business] was never easy, but it has gotten harder over the time. If I had it all to do over again, I wouldn’t do it.”

Many agree there’s still work to be done in Florida and elsewhere.

NerdWallet.com rates cities according to worker abundance and quality, access to start up money, affordability, the local scene and how business-friendly they are. Only Tampa made it into the top 10 at number six.

A 2012 survey by The National Federation of Independent Business  found 45 percent of small businesses consider government regulation a “very serious” problem, a huge increase from the 2001 survey when the number was 17 percent.