Emanuel’s Chicago Among Cities to Get Federal ‘Manufacturing Communities’ Funds 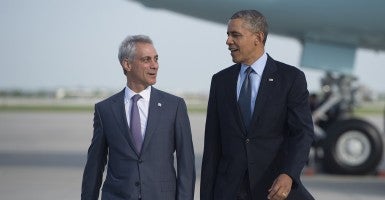 A dozen communities across the nation, including Chicago, where former White House Chief of Staff Rahm Emanuel is mayor, will receive up to $1.3 billion in federal taxpayer funds after having been approved recently by the U.S. Department of Commerce.

Designated as “manufacturing communities,” the Commerce Department stated each region is part of a federal initiative to “help communities attract and expand private investment in the manufacturing sector and increase international trade and exports.”

The announcement, part of an initiative launched by the administration in December 2013, came a day before newly released economic data for the first quarter of 2014 revealed the U.S. economy shrank for the first time since 2011.

According to a report last week, manufacturing job growth primarily concentrated in the Midwest and South after the recession.

The communities chosen as part of the Commerce Department’s plan are spread out across the nation.

The 12 communities were chosen, out of 70 that applied, by an “interagency panel,” said the Commerce Department,.

The White House said Wednesday the administration planned to have a second competition later in the year to determine its next round of funding, as well as convene the 70 communities that applied for funding so they could share best practices.

Commerce Secretary Penny Pritzker said in a statement the 12 manufacturing communities “represent a diverse group of communities with the most comprehensive economic development plans to attract business investment that will increase their competitiveness.”

Emanuel, in a statement released on his office’s website, said the “designation of Chicago as a Manufacturing Community, eligible for up to $1.3 billion in funds from 11 federal agencies, is a direct result of our work to bring the Digital Manufacturing Lab to Chicago, our investments in College to Career manufacturing training programs, and our success in attracting new manufacturers and jobs to Chicago.”

Since assuming office in 2009, the Obama administration has advocated for the use of government and taxpayer funds to fuel job creation and economic growth.

Critics say taxpayer funds have been used by the administration to benefit the business interests of its political allies and campaign donors.

Emanuel also reportedly sent lobbyists to the Illinois capital to push for a tax hike on the city’s wireless customers through an extension of the monthly fee charged for 911 dispatch services.

The mayor’s office didn’t return a request for comment.