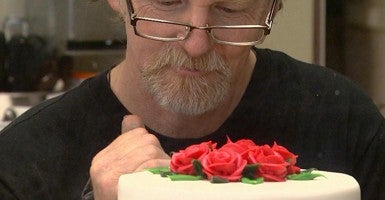 On Friday, the Colorado Civil Rights Commission ruled unanimously that Jack Phillips, owner of Masterpiece Cakeshop, must create wedding cakes for same-sex couples, even if doing so violates his beliefs. This victory for government coercion is the latest defeat for liberty and the rights of conscience.

It all started in 2012, when a same-sex couple received a marriage license in Massachusetts and asked Phillips to bake a cake for a reception back home in Colorado, a state that in 2006 constitutionally defined marriage as the union of a man and a woman. Phillips declined to create a wedding cake, citing his faith: “I don’t feel like I should participate in their wedding, and when I do a cake, I feel like I am participating in the ceremony or the event or the celebration that the cake is for,” he said. The couple later obtained a wedding cake with rainbow-colored filling (illustrating the expressive nature of event cake-baking) from another bakery.

The American Civil Liberties Union filed a complaint against Masterpiece Cakeshop with the state, alleging violations of Colorado’s public accommodation law. Administrative Law Judge Robert N. Spencer ruled against the bakery on Dec. 6, 2013, concluding that Phillips violated the law by declining service to the couple, “because of their sexual orientation.”

Since the 2013 ruling, Phillips stopped creating wedding cakes, though he continues to sell cookies and brownies at Masterpiece Cakeshop.

Phillips isn’t the only small-business owner in this situation. Families across the country are being hauled into court for living by their belief that marriage is the union of a man and a woman. As we note in our recent Backgrounder, florists, photographers, family bakeries, and adoption agencies, among others, have faced penalties and lawsuits or been driven out of business for working in accordance with their faith.

Indeed, a growing number of incidents demonstrate that the redefinition of marriage and state policies on sexual orientation create a climate of intolerance, intimidation and legal coercion for citizens who believe marriage is the union of a man and a woman.

It’s time for state and federal policy to respect Americans’ ability to live and work in accordance with their beliefs. Even in states where marriage has been redefined, government should not coerce individuals and organizations to violate their beliefs that marriage is the union of a man and woman. Although Americans are free to live as they choose, no one should demand that government compel others into celebrating their same-sex relationship.