Not Satire: Despite Waiting Lines, Some VA Employees Got Bonuses 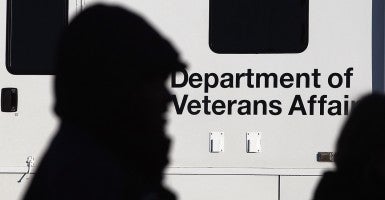 The Veterans Affairs Department health care scandal has deepened, with new revelations of incompetent management and misplaced spending priorities, including millions of dollars paid out in bonuses at the very hospitals where services were the worst.

But Freedom of Information Act requests by Illinois-based watchdog group Open the Books reveal that the VA spent millions on bonuses during the last three years at Hines.

As far back as 1999, the VA had found systemic quality-of-care problems at Hines with little done to correct them. A VA study concluded that “Hines has the most inefficient physical plant for inpatient care and the most significant compliance issues with patient privacy.”

In 2005, a VA study rated Chicago the worst regional office in the country. Now the man in charge at Hines, Murawsky, has been elevated to oversight of the entire VA system.

Democrats in Washington have started touting a recent poll showing a slight plurality (43%) of Americans believe the scandalously poor quality at VA hospitals is due to recent budget caps and inadequate financial resources devoted to the hospital system.

This was slightly higher than the 41% who believe the shoddy care is due to federal bureaucratic incompetence.

The revelations of bonuses suggest that misspending may be the biggest problem.

The VA’s own budget numbers indicate a more-than doubling of the agency’s expenditures to $57 billion from $28 billion since 2003. The patient load is up only about one-third over the decade.

So the VA has more money than ever per patient, even after adjusting for inflation.

As far as mismanagement, the problem of “performance” bonuses at the VA appears to have been systemic. An Open the Books investigation has found:

As many as 40 veterans may have died awaiting care at this hospital system and about 1,300 waited more than six months for care.

• In 2013, Phoenix VA Director Sharon Helman received the No. 1 bonus out of 3,170 employees (at Phoenix): $9,345. The number of avoidable deaths was higher than at nearly any other hospital.

• In Chicago, $1 billion in salaries were supplemented with $4 million in bonuses over a three-year period.

• At the seven most troubled VA facilities, almost $9 million in bonuses were paid out to 13,000 employees.

“This would be like giving a bonus to the management and players of the last place Chicago Cubs,” complains Adam Andrzejewski, founder of Open the Books. “What the VA executives must answer is why every veteran didn’t receive world-class health care.” Many vets don’t even receive average medical care.

Republicans are lobbing partisan grenades at the Obama Democrats for the VA scandal, and there is little question that ineptitude has worsened over the last five years. But this is a bipartisan scandal.

For at least 25 years VA health care has been documented as inferior to care provided under private insurance.

That’s one reason many veterans choose private hospitals rather than VA facilities.

Now some members of Congress are wondering whether it is hopeless to upgrade the VA health system. Government-run health care with global budgets — in Canada, in Britain, in the VA, in Medicaid — “almost always reduce costs by rationing care, reducing quality, and increasing waiting lines,” says health care expert John Goodman, president of the National Center for Policy Analysis.

This tiger never changes its stripes.

Perhaps a whole new approach to providing medical care to veterans is in order.

“Why not give veterans a health care voucher and let them shop around for the doctors, clinics and hospitals of their choice?” asks Phoenix-based physician and Cato Institute health care analyst Dr. Jeff Singer. “If quality is poor or waiting lines are too long, they can go elsewhere.”

Veterans deserve world-class health care and what is becoming tragically clear is government is incapable of providing it.