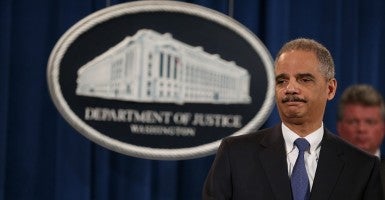 In a May 17 commencement speech at Morgan State University, Attorney General Eric Holder once again dismissed the problem of voter fraud as being inconsequential. Efforts to curb it, he claimed, are merely attempts to deprive minorities of their right to vote.

It’s not just that Holder personally persists in ignoring the many cases of such fraud that have been documented by historians and journalists. His entire Justice Department studiously ignores evidence of possible fraud and steadfastly refuses to do anything about it. I know this from personal experience.

From 2010 to until 2013, I served on the Fairfax County Electoral Board in Virginia. In August 2011, we notified the Office of the U.S. Attorney for the Eastern District of Virginia in Alexandria, as well as the Public Integrity Section of the Criminal Division of the Justice Department (which coordinates election crime prosecutions) in Washington, of possible voter fraud by non-citizens.

In checking with the Virginia Department of Motor Vehicles, the board had discovered 278 registered voters who, when they got their driver’s license, had told the DMV that they were not U.S. citizens. Before we cancelled any of the seemingly illegal registrations, we gave all of these voters the opportunity to confirm their citizenship. None of them did so. Almost half of them (117) had not only registered to vote, they had in fact voted in state and federal elections.

“Federal Prosecution of Election Offenses,” the handbook written by the DOJ’s Public Integrity Section, notes that falsely claiming to be a citizen on a voter registration form violates three different federal statutes: 42 U.S.C. ï¿½1973gg-10(2), 18 U.S.C. ï¿½1015(f), and 18 U.S.C. ï¿½911. Each of these violations are felonies, subject to imprisonment of up to three or five years, depending on the statute.

As the handbook further explains, actual voting by a non-citizen violates 18 U.S.C. ï¿½611 and is a strict liability offense. In other words, it “does not require proof that the offender was aware that citizenship is a prerequisite to voting.” Violations are misdemeanors punishable by up to one year in prison.

The Electoral Board’s letter to the Justice Department seemingly disappeared into a black hole. There were no phone calls, no emails, and no inquiries from the U.S. attorney’s office or from the Public Integrity Section. In comparison to some of the very complex cases that federal prosecutors have to investigate, investigating these cases would have been easy. With copies of the voter registration form and the voting history in hand, prosecutors would then simply have to verify whether or not the individual was a citizen at the time of registration or voting.

But the Justice Department apparently had no interest whatsoever in investigating almost 300 cases of possible felony violations of federal law.

Of course, this illustrates one of the key problems with voter fraud. Even when election officials uncover it, they often find it difficult to interest law enforcement officials in doing anything about it. The prosecutors’ reasons range from political (not wanting to upset members of their own political party who may be targets of an investigation) to giving it a low priority – especially after the election is over. And, frankly, few prosecutors want to get involved in cases that critics might racialize with false claims of vote suppression or voter intimidation.

Regarding Fairfax County, there is no question that Eric Holder’s Justice Department completely ignored evidence of possible voter fraud in a state that has gone back and forth between the Democrat and Republican parties in the past few elections. Known for extremely close elections, it is a state where even a small amount of fraud could make the difference – such as the 2013 attorney general’s race, where Democrat Mark Herring was declared the winner by fewer than 1,000 votes out of 2.2 million cast, or the 2005 attorney general’s race, which was decided by fewer than 400 votes.

But Holder finds all of that to be inconsequential.