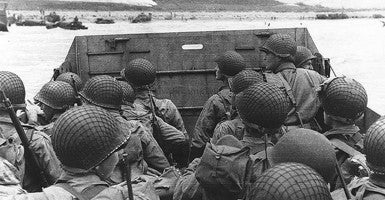 It’s an important line to recall as we prepare to mark the 70th anniversary of D-Day. Rick’s conversion from pacifist to patriot in the classic 1942 film mirrored America’s transformation after Pearl Harbor from isolationism to taking its fights to the frontier of freedom.

“Casablanca” and the waves of patriotic war films that followed were Hollywood’s payback for Pearl Harbor – Tinseltown’s counterattack against fascism. The real response was D-Day, the allied invasion of Normandy, France – the beginning of the campaign that took down Fortress Europe.

D-Day wasn’t America’s only D-Day during World War II. In the Pacific alone, MacArthur’s troops conducted 52 amphibious landings. Some of the fighting, in places like Guadalcanal and Iwo Jima, was as tough or tougher than the fight to takes the heights at Omaha Beach.

Yet, as America salutes the troops that staged the D-Day invasion, that battle has become emblematic – not just of every landing, not just every military operation during the Second World War, but every great moment in American military history.

More than any other battle in the American memory, D-Day symbolizes the Americans going forth in the world when they had no other choice but to fight for what is right.

In many ways, D-Day was America’s battle. Every branch of the armed forces fought during the invasion of Normandy. The Navy delivered the troops. The (Army) Air Force took command of the sky. Sixty U.S. Coast Guard cutters provided search and rescue. Even a handful of Marines were on hand. And 160,000 GIs hit the beaches.

To pause and remember D-Day is in truth an opportunity for all of us to stop and recall the service and sacrifice of every fighting American from Bunker Hill to Baghdad. We are free and safe because they fought.

A D-Day anniversary is also cause to recall the responsibilities of freedom. Another emblematic war film appeared a few years after the 50th anniversary of the assault on the Normandy coast. The first scenes of “Saving Private Ryan” are so real that combat veterans could not watch the movie without gripping their seats with white knuckles.

The rest of the film is, frankly speaking, a lot of Hollywood schlock. But the message of the movie is as profound a clarion call for this generation as “Casablanca” was for the Greatest Generation. After losing his men in a mission to bring back Private Ryan with his dying breath, Captain Miller tells Ryan to “earn it.”

It’s a message we should all take to heart.

It is more than trite, but also more than true, to say that freedom isn’t free. D-Day was more than a liberation. It was reminder that as long as there is evil in the world, America must always be prepared for more D-Days.

The nation’s leaders have the responsibility to put forces in harm’s way only when it is absolutely necessary – to use military force with prudence and judgment. It is the nation’s responsibility to respond to the call with courage and commitment. That is the lesson of all our D-Days.