Russia and China Just Signed an Energy Deal. Why You Should Be Scared. 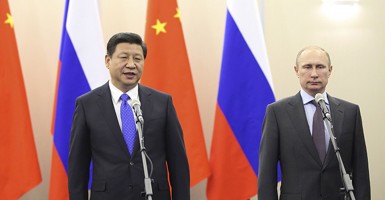 Is anyone else scared to death about this week’s announcement out of Beijing that China and Russia have agreed to a 30-year natural-gas deal? The agreement means the building of hundreds of miles of pipelines to feed cheap Siberian gas to China. President Xi Jinping of China and President Vladimir Putin of Russia met in Shanghai to ratify this treaty in person, thus announcing to the world this is a big, big deal — a game-changer.

These two countries were our adversaries in the Cold War, and remain our greatest economic and foreign-policy rivals. While this energy pact isn’t quite as threatening to the world as the Nazi–Soviet non-aggression pact was in 1939, its security and economic ramifications over the next quarter century could be very serious indeed. Russia is already doing more than saber-rattling in Eastern Europe, and China’s expansionist ambitions in the Far East are no secret. China also has been boasting that it will soon replace the U.S. as the world’s economic superpower — and this energy deal may represent a big step forward toward that goal.

To respond to this stunning economic development by shrugging and moving on, as if nothing had happened, would be a grave mistake. When LeBron James and Kevin Durant sign with the same team, you’d better start doing an urgent talent upgrade, or prepare to get buried.

The right response is to get serious about forming a monster deal of our own: to unite with our neighbors and allies in Canada and Mexico to connect North America’s energy bonanza from shale oil and gas and oil sands to every area of the continent — from Alberta to Mexico City — and then build the infrastructure to export it to our allies in Western Europe. Stop pretending, Mr. President, that we are going to power our $18 trillion economy with windmills and solar panels. This isn’t a time for pixie dust.

So step one is obvious: Get going immediately on building the Keystone pipeline. This is now an economic and national-security issue of the highest order.

Step two: Let private industry build out the construction projects — pipelines, transmission lines, liquefied-natural-gas (LNG) terminals — so we can export our 500 years’ worth of natural gas all over the world. Repeal federal laws that prohibit exporting petroleum.

Step three: End the war on coal, or at least call a truce. We are the Saudi Arabia of coal. Why would we want to stop production — especially as coal plants have become much cleaner in the past decade?

Step four: Start issuing permits and leases for drilling on federal lands. It’s long past time to tap into our trillions of dollars of energy assets.

Energy is known as the master resource for good reason. Everything else our nation produces is a derivative of energy. Energy, therefore, is power — for our economy and our military. Can we please stop forcing the Pentagon to waste billions of dollars every year on biofuels — at a time when defense dollars are already scarce? National security is not a welfare program.

The good news is that we have a lot more energy than China and Russia combined. We can out-compete them both on the energy and technology front. But they have an advantage: They don’t have a left-wing, anti-development EPA and State Department holding up vital domestic energy projects. Don’t expect the Russian environment department to veto the Russia–China pipeline, and don’t expect Vladimir Putin to tell the Russian people that he still needs to determine whether that project is in the national interest (as Barack Obama declared when he delayed Keystone several weeks ago).

All of which is to say that, this week, the world shifted on its axis. The geopolitical center of power on this planet repositioned itself in the direction of our greatest rivals. That is the real story of this blockbuster $400 billion deal. Mr. President, stop worrying about the melting of the polar ice caps and the world temperature a half century from now, and deal with the dangerous world as it is today. We need a big-boy response to the Russia–China alliance, so let us hope this White House is up to it.