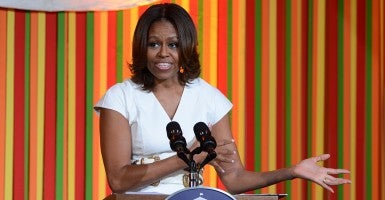 Yesterday in an op-ed, First Lady Michelle Obama attacked the House of Representatives for considering giving some schools a one-year reprieve from complying with the new school lunch requirements.

In a New York Times column on her Let’s Move initiative, Obama addressed several issues but sidestepped acknowledging key problems that have been identified with the school lunch program. For example, she doesn’t talk about:

There’s no mention of the independent Government Accountability Office  report that highlighted many of the problems or the concerns expressed by school officials on the front lines of the school lunch program.

Obama did continue repeating the administration’s talking point, writing that “Today, 90 percent of schools report that they are meeting these new [lunch] standards.”

Most schools might be meeting the standards, but that’s not the issue.  Actually, if most schools weren’t meeting the standards, they wouldn’t be experiencing the current problems. Specifically, Obama doesn’t address the high costs involved with compliance, difficulty of regular compliance, food waste, declines in participation and why the First Lady and administration believe the federal government should make these decisions rather than parents, students and local school officials.  Nor does she address whether schools’ continued compliance is feasible. Some in Congress, concerned that continued compliance is an onerous burden for schools, are trying to find a solution by recommending a one-year waiver for schools in meeting the new standards.

In the op-ed, Obama continued the misleading claim the House measure somehow would weaken the standards. “Some members of the House of Representatives are now threatening to roll back these new standards and lower the quality of food our kids get in school,” she wrote. A one-year reprieve has no effect whatsoever on the substance of the standards.

Obama also argues the House is overriding science through this potential waiver. But the standards are not being changed.  This waiver is about timing, not science.

There are major problems with these standards.  For example, kids can’t be healthy if they aren’t hunger-free.   The administration and Michelle Obama may want to dig in and not give an inch on their standards, but this only hurts children.

Congress does need to go beyond this waiver. Lawmakers need to take a close look at the new standards and make changes that truly meet the interests of children, including reconsidering why Congress is making decisions that should be left up to parents, schools and localities.