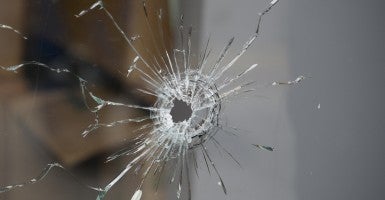 Bullet holes are seen in the glass windows where one person was killed during Friday’s tragic mass shooting and stabbing in Santa Barbara, California (Photo: Gene Blevins/ZUMAPRESS.com)

Mass shootings in southern California last week are bringing up many of the same arguments the country heard after similar atrocities in Columbine, Aurora, and, more recently, Newtown.

“We need more money and leeway for our mental health system to catch these people in advance.”

“We should shame and regulate the entertainment industry and video game producers who showcase and glamorize violence in their products.”

These all raise worthy points—some more worthy than others. But we could do all the above—pass more gun control laws, increase the power of the mental health system, ban violence in Hollywood—and bad things still will happen.

We are never going to be able to pass enough laws or ban enough items to stop evil from happening. People do bad things—and guns, mental illness, and violent video games aren’t always to blame. There are times when the only explanation is that the person acted on his evil desires and intentions. We don’t have all the facts yet in this case, and understandably many people believe the killer must have been crazy because, “Who else would do such a terrible thing?” But what if the killer’s failure was one of conscience, not of mental health?

Could the explanation be that he allowed himself to be overtaken by his own self-centeredness, jealousy and hatred of others?

Of course, Americans need to discuss these matters and debate how to make our communities safer and how to prevent such atrocities before they happen.  But we can’t ignore the moral dimension—although we usually do following such horrific incidents.

That’s a problem, because if we pretend evil doesn’t exist, or don’t dare mention it for fear of being politically incorrect, or pass off every bad person as someone who was mentally ill or had bad parents or watched too much violence on TV, or any combination of those, we lull ourselves into thinking more laws will end violence. We come to believe that once we’ve passed enough laws, “never again,” will be a reality—until violence does happen again.

The horrific massacre in California would not have been stopped by more gun laws. The killer used handguns he had purchased legally over the past year—not an assault weapon.  There is no evidence any of the gun restrictions proposed in Congress last year would have prevented Friday’s shooting.

Three of the victims were killed by a knife. The killer also rammed in to others with his car—thankfully, no one was killed by his vehicle but they certainly could have been. We already have laws against stabbing people and running over people. Are we now going to ban knives and cars?

Our second president, John Adams, said, “If men were angels, no government would be necessary.” He was right.  People are not angels. Laws are necessary. But we delude ourselves if we think they will banish all evil from the world.