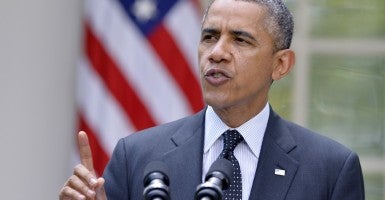 This morning’s depressing revised calculation of the growth of the economy in the first quarter of 2014 (-1.0 percent) makes it official: The Obama expansion is now $2 trillion short of where we would be if growth in this recovery had matched the Reagan recovery that started in 1982.

That is to say the average family would have about $5,000 more income each year to spend if it were not for this slow recovery.  The Census Bureau reports that median household income is down by $1,800 since this so-called recovery began.

Worse, investment plummeted in the first quarter of 2014 by 11.7 percent from the same period in 2013.  That was the biggest decline since the recession ended in 2009.  Without investment, businesses can’t grow and wages won’t rise.  Capital investment by businesses is a strong leading indicator of future prosperity.

The administration was quick to blame the dismal numbers on the cold winter and blizzard conditions in the Midwest and Northeast. But he 2013 growth rate was 1.9 percent, and the rate has been less than 2 percent for more than a year. Under Reagan, the growth rate during the expansion was more than 4 percent.

There are strong signs the economy picked up steam starting in April, but the overall picture of a failed recovery plan is now unmistakable.  We spent $830 billion on a stimulus stuffed with make-work government-jobs programs and programs to pay people to buy new cars, borrowed $6 trillion, launched a government-run health-care system that incentivizes businesses not to hire more workers, raised tax rates on the businesses that hire workers and the investors that finance businesses that hire workers, printed $3 trillion of paper money, shut down an entire industry (coal), and tried to regulate and restrain the one industry that actually is booming (oil and gas).

Is it really a surprise the government is underperforming and this is the worst recovery from recession in 75 years.Ideas do have consequences – especially bad ones.

What good that has come from Obamanomics? Hopefully, we all have relearned a painful lesson that government spending, congressional taxing, Treasury borrowing and Fed printing don’t stimulate the economy. The new GDP report reminds us these battle-tested economic strategies don’t work. For tens of millions of Americans, unfortunately, this is a lesson learned the hard way.