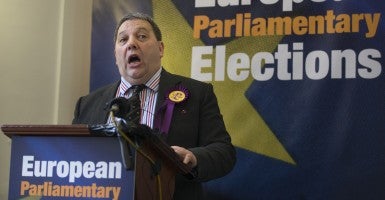 David Coburn, newly-elected MEP (one of six) for Scotland, shortly after the declaration for the European Elections at Edinburgh City Council. (Photo: James Glossop/Newscom)

Voters sent a clear message in elections May 22 – 25 for the European Parliament: Many remain deeply skeptical regarding further EU integration.

The European People’s Party, a eurofederalist parliamentary group, will retain the largest number of seats at 213 out of 751, but that’s down significantly from their 274 in the current Parliament. But parties with Eurosceptic policy platforms won across Europe in an election that undoubtedly will reverberate in Brussels for years to come.

UKIP—The United Kingdom Independence Party—was the big winner in the elections. UKIP, which wants the UK to leave the EU and for Brussels to return power to London, claimed 27.5 percent of the vote—the largest percentage for any party—and picked up 24 seats. Nigel Farage, the leader of UKIP, stated after the election: “Up until now, European integration… always seemed to be inevitable and I think that inevitability will end with this result.”

These elections already have shaken up business as usual in Europe. UK Prime Minister David Cameron called the EU “too big and too bossy, and French Prime Minister Francois Hollande is calling for EU reform and some return of power to the individual nation states.

The EU elections saw the rise of some extreme ultra-nationalist parties in certain nations, but the overall message from voters in Europe is that further EU integration should be halted. It is not hard to see why.