This Congressman Says America Must Lead With ‘Capability’ and ‘Will’ 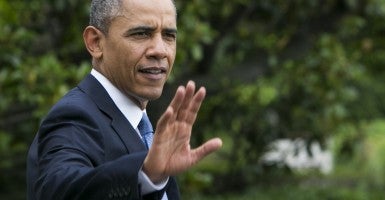 President Obama on his way to West Point. (Photo: Polaris/Newscom)

As President Barack Obama issued a broad defense of his foreign policy, arguing for restraint and coalition-building, Rep. Mac Thornberry, R-Texas, speaking at The Heritage Foundation, warned of the consequences of walking away from war.

Thornberry, vice chairman of the House Armed Services Committee, today criticized Obama’s announced plans to withdraw all troops from Afghanistan by the end of 2016. He also called for a strong overall American military presence in a keynote speech at Heritage’s event commemorating World War I, “100 Years Later: The U.S. Still Needs to Provide for the Common Defense.”

“Power and influence in the world come from having capability plus the will to use it,” the Texan said.

“I am not willing to accept that we must have a smaller military and a smaller role in the world,” Thornberry said. “Because we know that as the United States retreats, others will fill the void, and those others will not move the world toward greater freedom and greater prosperity.”

In his commencement address this morning at the U.S. Military Academy at West Point, Obama not only defended his plan but challenged opponents who see the approach as a sign of weakness.

The president described his method for determining when to act on terrorism.

“In taking direct action, we must uphold standards that reflect our values,” Obama said. “That means taking strikes only when we face a continuing, imminent threat, and only where there is near certainty of no civilian casualties. For our actions should meet a simple test: We must not create more enemies than we take off the battlefield.”

The Heritage event, part of the think tank’s annual Protect America Month, was scheduled to mark the 100-year anniversary of World War I.

Thornberry spoke about lessons learned from that conflict, as did a panel featuring Robert Zarate, policy director of the Foreign Policy Initiative, and Kim R. Holmes, a distinguished fellow at Heritage who is a former assistant secretary of state.

More broadly, the speakers emphasized a need for strong U.S. leadership in the face of a threatening world.

“Absent his strategy is what happens when we walk away and the Taliban returns,” Holmes said. “After all, World War I wasn’t truly over; World War II was around the corner. If we walk away from Afghanistan too soon, we may need to return again to finish the job.”

Similarly, Zarate described World War I as a prelude to a larger continental struggle in Europe, where future conflicts — World War II and the Cold War – followed the original.

“The major lesson [from World War I] is that the U.S. needs to see the world as it is, not as we want it to be,” Zarate said. “Russia and China are both returning powers. Al-Qaida is not on the ropes. It is active in the Arabian Peninsula, Africa, and Syria. The extremists are getting battle hardened and setting their sights on the U.S.”

Obama, in addressing “the first [West Point] class to graduate since 9/11 who may not be sent into combat in Iraq or Afghanistan,” cast the world – and the terrorism that threatens it– in nuanced terms.

The president argued that, as al-Qaida becomes less centralized, America must partner with the countries where the terrorists seek to get a foothold.

Obama announced a $5 billion fund to help countries fight terrorism, saying it would go toward training security forces in Yemen and Libya, supporting peace operations in Somalia, facilitating French operations in Mali, among other things.

Obama also said he would seek to increase support for the Syria opposition, and neighboring countries such as Jordan, Lebanon, Turkey, and Iraq.

The president said he hopes those alliances prevent war from happening in the future.

However, Thornberry said, when the rest of the world does not behave as it should, America should act to preserve its interests.

“The president accuses Republicans of wanting to use military force in every situation,” Thornberry said.  “I do not. I believe in smart power. Power and influence in the world come from having capability plus the will to use it.”