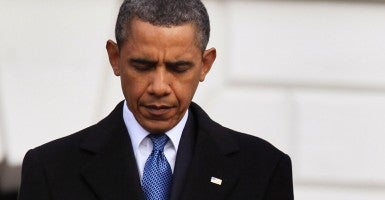 Nevada has become the latest state to announce it will concede Obamacare exchange enrollment responsibilities to the federal government via healthcare.gov.

Federal taxpayers already have sent about $4.9 billion total in grants to the states to establish exchanges, with almost $4.2 billion going to just the 16 states and the District of Colombia that had planned to operate their own exchanges in 2014.

Nevada received $91 million in grants and, as of April 19, had enrolled 45,390 people, for a federal taxpayer cost of $2,005 per enrollee. Cover Oregon, the exchange that was never able to successfully enroll one person online from start to finish, got $305 million in federal grants and had 68,308 enrollees, so its cost was about $4,465 per enrollee. Massachusetts’s per-enrollee cost was $5,648.  Hawaii received $205 million in grant money and enrolled only 8,592 people, for an astonishing per-enrollee cost of $23,859.

Worse yet, in Nevada, the federal government is now spending even more money to transition their exchange to the federal exchange.

According to Nevada’s announcement:

“The federal government will pay all costs associated with transitioning from the BOS [Xerox’s health insurance enrollment system] to healthcare.gov. Nevada will not be required to pay a monthly per -member per-month fee to healthcare.gov for its use. The federal government will pay 90 percent of any costs incurred to disconnect Nevada’s Medicaid system from the BOS and to connect Nevada’s Medicaid system to healthcare.gov. The initial high estimates of this cost ranges between $15 – $20 million, of which Nevada must pay 10 percent.”

As with much of Obamacare, it remains unclear where this additional money will come from, what the total costs will be or whether other states are receiving the same deal.

In response to this this continuous steam of Obamacare exchange spending, Sens. Orrin Hatch, R-Utah,  and John Barrasso, R-Wyoming, recently introduced a bill that would make states that choose to no longer operate their own exchange  return the taxpayer dollars that were spent on the failed exchanges to the federal government. The legislation would require states to repay 10 percent of their wasted federal grant funding each year for 10 years.  This would force Nevada, Oregon, and Massachusetts to repay a combined $575 million.